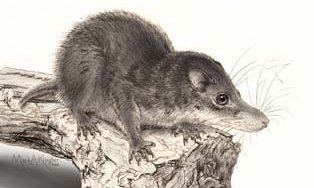 From James Owen at National Geographic News comes this article:

Scientists in China have discovered the fossilized 125 million year old remains a small mammal that walked like a platypus but looked like a shrew. The unusual find provides important new clues to the evolution of early mammals, the researchers say.

Measuring just 4 cm long and weighing 15 to 20 grams, Akidolestes had a thick coat of fur with jaws, teeth, and forelimbs that identify it as a close relative of modern placental and marsupial mammals. But the researchers noted a highly unusual back-half to its skeleton—similar to that of primitive, egg-laying mammals known as monotremes. The only living descendants of monotremes are the strange duck-billed platypus of Australia and two species of spiny anteaters, or echidnas.

Akidolestes had a front posture and gait similar to that of a squirrel, with elbows tucked under its body, but its hind legs had the sprawling appearance of a lizard's. "The walking and running movement in Akidolestes would be similar to the platypus," said Zhe-Xi Luo, curator of vertebrate paleontology at Carnegie Museum of Natural History in Pittsburgh, Pennsylvania. 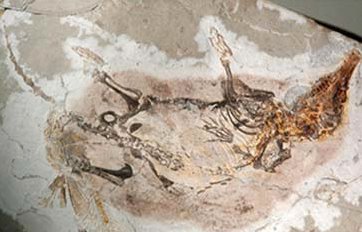 The fossil challenges conventional wisdom about how placental mammals split from earlier egg-layers. The split may not have been as clear-cut as previously thought, they say. Some placental mammals have have readopted some of the physical characteristics of monotremes.