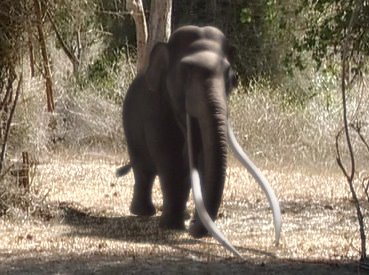 From Stefan Lovgren at National Geographic News comes this article:

Fossils from the prehistoric elephant-like Stegodon have been found in a rice field in a province three hours from Bangkok. Other specimens were also found deposited in a thin layer of fine gravel and sand mixed with organic matter about 5 meters below the surface, including skulls of a gavial (a crocodile-like reptile) and a spotted hyena, deer antlers, and a buffalo horn. The fossils are believed to be about 400,000 years old.

"I've never seen such a community of large mammals in one excavation," said Yaowalak Chaimanee, a government paleontologist.

The discovery may shed new light on the distribution of prehistoric species, including human ancestors, in the region. The site documents a period when Thailand had a more temperate climate, attracting animals from India and China.