LiveScience.com presents an article by Benjamin Radford from the Skeptical Inquirer: 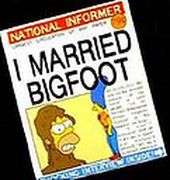 As reported around the world, the ivory-billed woodpecker (Campephilus principalis), last known to exist in 1944, was sighted in eastern Arkansas in 2004. The sighting prompted a massive (and secret) follow-up search in 2005 of a sixteen-square-mile area of Arkansas forest. When the bird was confirmed to exist, the discovery spawned international headlines, an article in the journal Science, and a book titled The Grail Bird: Hot on the Trail of the Ivory-billed Woodpecker.

While the search for additional evidence of the woodpecker continues,

the investigation is instructive for what it did not find: the alleged and elusive Bigfoot. The search for the woodpecker took months of intensive research in the woods of rural Arkansas. Bigfoot believers try to explain away the lack of evidence by suggesting that Bigfoot are out there in remote areas, but few people are out actively looking or listening.

Though the researchers were not specifically looking for Bigfoot, new discoveries often occur when people look for one quarry but find another. Surely so many trained eyes and ears, with so much equipment, could not have failed to notice hairy bipedal giants living in (and roaming through) the Arkansas woods.

Read the rest of the story HERE.