Coelacanths Pushed To Extinction By Trawlers

From an article by Inigo Gilmore in The Observer:

It seems that man may have discovered the fish just to eradicate it, as ever deeper trawling throws up serious fears for the already dwindling populations of the fish, which lives at depths of between 100 and 300 metres.

The appearance of these creatures off the Tanzanian coast is a dramatic and as yet unfinished chapter in the extraordinary story of the coelacanth, an ancient fish that was 'rediscovered'. The coelacanth evolved 400 million years ago and was believed to have gone the way of the dinosaurs until one was caught off the coast of South Africa in 1938. 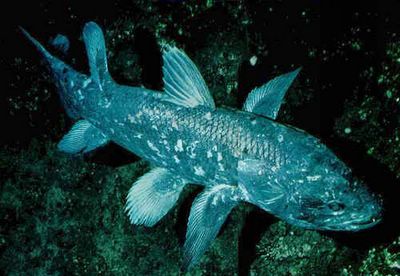 The coelacanth has a remarkable physiology - it has no backbone, but an oil-filled 'notochord' and four limb-like appendages, with stubby fins. It has a double tail and gives birth to as many as 26 young at one time. It is believed to gestate for 14 months and may live for more than 80 years. The young develop inside the mother, attached to the outside of a huge yolk-filled egg of about 100mm in diameter.

It was in August 2004 that the local fisheries authority first received a phone call saying fishermen in Kigombe had caught a 'strange' fish. Officials went to check and to their amazement found two specimens of Latimira chalumnae - the coelacanth. Over the next five months 19 more were netted - weighing between 25kg and 80kg. Another appeared last January, then there was a gap until the fish again turned up as The Observer visited.

The numbers are perplexing officials of the Tanga Coastal Zone Conservation and Development Programme, which has a long-term strategy for protecting the species, with the help of Irish aid. They see a connection with trawling - especially by big Japanese vessels - near the coelacanth's habitat, as within a couple of days of trawlers casting their nets coelacanths have turned up in shallow-water nets intended for sharks.