From Ed Stoddard at RedOrbit News come this article:

Scientists announced on Thursday they had definitive proof that the "Taung child," a 2-million year old apeman skull, famed as one of the most dramatic human evolutionary finds, was killed and eaten by an eagle.

Unearthed in South Africa in 1924, the Taung child shook the scientific world when Raymond Dart suggested in 1925 that it was a higher form of primate which he dubbed Australopithecus africanus, or "man-ape of southern Africa."

For decades it was believed that the famous Taung child had been slain by a leopard or a saber-toothed cat. But 10 years ago Berger and a colleague suggested that the child, who was about 3 or 4 years old when it died, was killed by a large bird of prey. 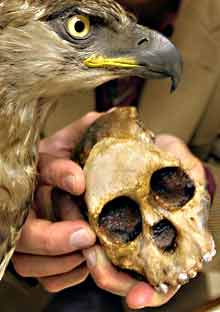 "These critical clues were puncture marks in the base of the eye sockets of primates, made when the eagles ripped the eyes out of the dead monkeys with their sharp talons and beaks. It was a marker that others hadn't noted before, that linked eagles definitively to the kill," Berger said.

Berger said the child had probably been scooped up by an eagle and taken to its nest, where its eyes were ripped out for dinner. The child's skull eventually fell out of the nest, only to be found almost 2 million years later.

Placing us on the eagle's menu may also explain other aspects of human evolution, from walking upright, which could present a smaller target to an aerial attacker, to our tendency to live in groups.

The announcement about the Taung child was made on Thursday at an international conference held at Wits. The conference celebrates the 80th anniversary of the Taung child's discovery and the 80th birthday of Professor Phillip Tobias. The papers detailing the discoveries will appear shortly in the American Journal of Physical Anthropology.