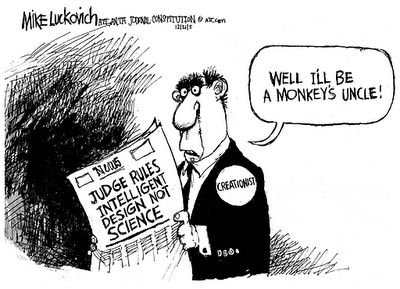 David Smillie in the Toronto Star has a great article on ‘intelligent design’. Here are a few excerpts, but it’s worth reading the whole thing:

“Our bodies are filled with similar examples of poor design. Why would an intelligent designer equip each of us with an appendix — an organ whose sole purpose is to become infected and periodically explode? If this was Intelligent Design, then it implies the designer hates us the way many interior designers hate the people who actually live in their creations.”

“First, ID could stand for Incompetent Design. Like the cousin you hired to build an addition to your house, this Designer simply wasn't up to the job. Which means the Designer can't be all-knowing (we wouldn't have had any flaws) or all-powerful (the flaws would have been fixed by now).

But what would it do to mainstream religion to teach students their creator was someone who just didn't do a very good job? A nice enough deity maybe, but not the sharpest knife in the drawer? I can't see hundreds of millions lining up to worship a second-rate creator.

Second, ID could stand for Infernal Design. Not to get needlessly Zoroastrian, but a lot of our design flaws make more sense if we assume we were created by someone who doesn't much like us and wants us dead. Which means that by worshipping the Designer, we're actually worshipping the bad guy.

There is a third possibility that comes to mind. ID could stand for Incomplete Design. What if the Designer is just beta-testing us to identify the bugs before rolling out Homo sapiens 2.0? Sure, we have lives that are nasty, brutish and short, but the designer doesn't really care and we have to muddle through so He can come up with something better for the next roll-out. And we're powerless to complain, because the Designer has a monopoly. I call this the "God as Microsoft" option.” 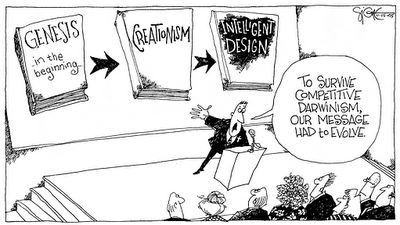