John R. Horner, regents' professor and curator of paleontology for the Museum of the Rockies at Montana State University in Bozeman, 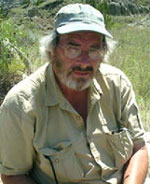 Mont., and famed consultant for Hollywood's "Jurassic Park" films, will receive an honorary doctoral degree at one of Penn States future commencement ceremonies. The Board of Trustees approved Horner for an honorary-degree on January 20.

Previous to assuming his roles at Montana State University, Horner was an assistant curator of paleontology at Princeton University in Princeton, N.J. In addition, he served as technical advisor to director Steven Spielberg for the movies "Jurassic Park" and "The Lost World."

A recipient of the MacArthur Fellowship -- sometimes called the "genius grant" -- and numerous research grants from national and international organizations, Horner is the author of more than 45 professional papers and 35 popular articles and co-author of five books. He has presented at more than 700 invited lectures around the world.