Riggs was an American who became Curator of Paleontology at what is now the Field Museum of Natural History in Chicago. Although he collected fossils from around the world he is best remember as the person who in 1903 recognized Brontosaurus as being a juvenile Apatosaurus. He also named Brachiosaurus. 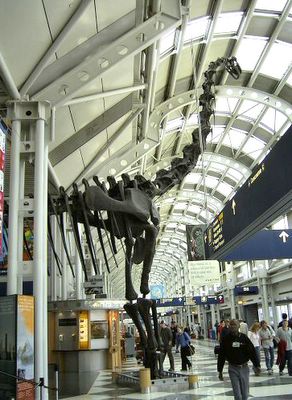 The Brachiosaurus (above) that now stands in Terminal B of the Chicago airport (and once was in the main entrance of the Field Museum before ‘Sue’ moved in) was built by the Palaeoblogger and associates.
Posted by Michael J. Ryan, Ph.D. at 1:25 PM