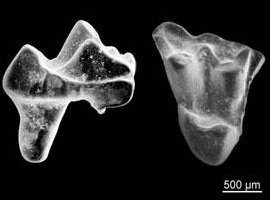 From ContraCosta.com comes this article:

The recent discovery of a 66-million-year-old marsupial tooth in the Netherlands provides fresh proof that a land bridge connected the North American and European continents during the age of dinosaurs.

St. Mary's College dean of science Judd Case and his colleague James Martin say the 2-millimeter fossil, which belongs to a newly discovered, extinct species, Maastrichtidelphys meurismeti, similar to an opossum, suggests that dinosaurs and small marsupials not only lived in Europe at the same time, but also traveled the same trans-Atlantic migration route from South Dakota to the Netherlands.

Taken together with other, recent finds of North American-type duck-bill dinosaurs and certain types of snakes in Northern Europe, it appears that animals used temporary land bridges to travel across the high polar latitudes 10 million years earlier than paleontologists had thought. The tooth may be tiny, said Case, but it will have a major impact on scientists' views of Cretaceous climate, geography and life.

Earth's geography was very different back then, said Case. The Atlantic was only half as wide. Sea levels were lower -- and significantly lower at two points, around 71 and 67 million years ago. And continents were connected. Case and Martin believe animals hopped from land mass to land mass above the 70-degree latitude line.

The discovery of a North American marsupial and duck-billed dinosaurs in Maastricht indicates that the polar crossing was no chilly experiment, but a temperate migration path in a world filled with new, flowering plants.
Posted by Michael J. Ryan, Ph.D. at 10:43 AM