Note: The following is modified from Steve Bissette's introduction to the new collection of the comic book PALEO by Jim Lawson. After 8 weeks we finally come back to the book that started Steve off on this retrospective. 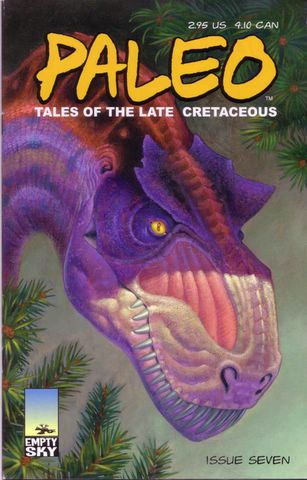 Among the hale and hearty survivors of the comic book industry implosion of the 1990's was Jim Lawson, whose concept for PALEO was already taking shape. Mirage Studios published Jim Lawson’s SF-adventure mini-series DINO ISLAND in 1993; shortly afterwards, Jim began work in earnest on his own ‘pure’ dinosaur comic which became PALEO.

For those of us who grew up aching for a dinosaur comic uncluttered by intrusive human characters, or anthropomorphized talking saurians, PALEO was a joy, a revelation, a little slice of heaven we could hold in our hands and revisit time and again. It’s what we’ve wanted since before we could clearly speak.

Lawson's PALEO is a time machine, a window back into a primordial world populated by glorious creatures we know walked the Earth eons before us.

PALEO is an honest-to-Goodness ‘dinosaur comic,’ and an impeccable one at that. 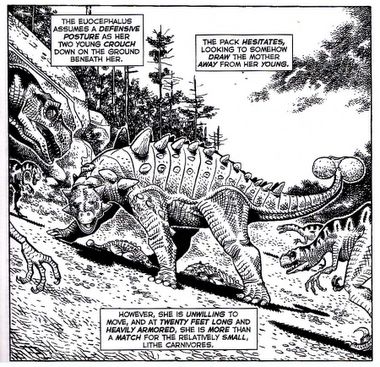 This is undoubtedly Jim Lawson’s most ambitious, personal, and polished work to date, building upon his already considerable creations and credentials, from his first published solo comic book series BADE BIKER to his more recent graphic novel collaboration with Peter Laird, PLANET RACERS [buy it HERE]. Though “comicdom” -- the industry, such as it is, and ‘the comics press,’ such as it isn’t -- has somehow seen fit to by-and-large ignore Jim’s prolific output, the fact is that he has produced more pages of the TEENAGE MUTANT NINJA TURTLES comic than any other artist, and an entire generation of comic readers have grown up with his work. Another generation is currently cutting its comicbook-reading teeth on his ongoing work on the new TURTLES series. 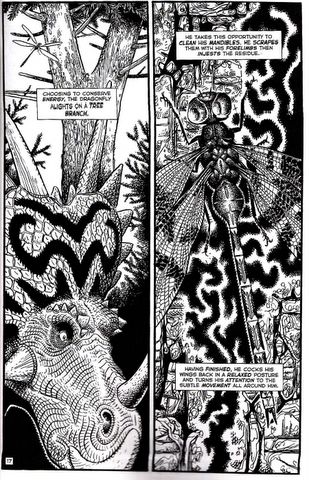 But PALEO is, to my mind, Jim’s finest work to date, with a breadth and depth of emotional intensity, clarity, and range that I find intoxicating. Jim breathes life into these creatures and doesn’t just put them through their paces: he walks in their footsteps, breathes the air they breathe, sinks his teeth into these glimpses of their lives as surely as they bury their choppers into one another.

With this book Jim takes you through the doorway he has forged into our shared prehistoric dreams, reveries, and fantasies. Each page is a fully-realized environment with a rich sense of lives lived beyond the border of mere comic panels and pages. 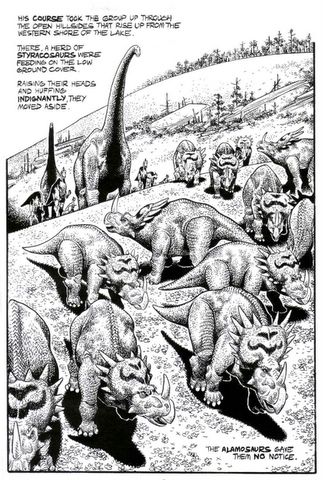 What you may not notice is how personal this body of work is to Jim. Maybe I’m too familiar with Jim’s immediate circle, but it seems to me there are clear correlations between the struggles his antediluvian protagonists endure and what I know of Jim’s experiences. The arenas are very different, the obstacles more lethal, the armor tougher, the teeth sharper, but Jim has, in his own way, walked in their footprints.

I’m happy to report that, as of this writing, Jim is still working on new PALEO material. Go pick up the latest issue or the collection -- which I suspect many young readers will pour over time and time again, wearing it out as thoroughly as I wore out my first copy of that CLASSIC ILLUSTRATED WORLD AROUND US comic, THE ILLUSTRATED STORY OF PREHISTORIC ANIMALS -- and rest assured, there will be more. Given the incredible volume of pages Jim has created over the past fifteen years for other comics and projects, I don’t think it’s either unreasonable or premature to hope that Jim might match or break Rex Maxon’s “Young Earth” record... ah, but I’m getting ahead of things again.

The path is in sight; I’ve taken you this far. Walk on...

You can reach Jim Lawson at:

Jim tells me that you can still buy Paleo through the Mirage Studios website--www.ninjaturtles.com. Just go to 'Buy Stuff' and then click on 'Other Projects'.

Next Week: 'Sturdy' Steve's Paleo Path might be over but don’t go away! Next week we start down a new path exploring 'dinosaur'-artists in both the comics and scientific field. First up is an interview with STEVE BISSETTE himself and a look at his own dinosaur book, TYRANT. We'll follow this with pieces on Pete Von Sholly, Mark Schultz, and a host of other interesting characters (both on and off the page)!

Read Part 8 of the series by clicking HERE.

Steve R. Bissette is an artist, writer and film historian who lives in Vermont. He is noted for, amongst many things, his long run as illustrator of SWAMP THING for DC Comics in the 1980's and for self-publishing the acclaimed horror anthology TABOO and a 'real' dinosaur comic TYRANT(R).
Posted by Michael J. Ryan, Ph.D. at 12:44 PM