American geologist and pioneer seismologist who developed and named the principle of isostasy. According to this principle, the level of the Earth's crust is determined by its density; lighter material rises, forming continents, mountains, and plateaus, and heavier material sinks, forming basins and ocean floors. 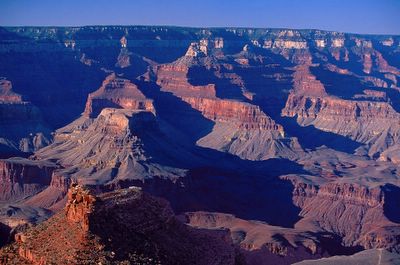 Also from Today In Science History:

In 1953, Stanley L. Miller's paper on the synthesis of amino acids under conditions that simulated primitive Earth's atmosphere was published in Science, Vol 300, Issue 5620, 745-746. Miller had applied an electric discharge to a mixture of CH4, NH3, H2O, and H2 (which was believed at the time to be the atmospheric composition of early Earth.) Instead of producing a random mixture of organic molecules, the surprising result was a mixture of amino acids, hydroxy acids, and urea. These compounds are so significant in the biochemistry of life, that this discovery marked the beginning of the modern study to understand the origin of life on Earth. Miller's paper was published only a few weeks after Watson and Crick reported their DNA double-helix model in Nature.

Read a review of the research in Science Archives HERE.
Posted by Michael J. Ryan, Ph.D. at 12:46 PM