Showing Off The Point of Stegosaurus Plates & Spikes

From EurekaAlert! comes this press release for the next issue of Paleobiology:

The bizarre plates and spikes that lined the backbones of the long-extinct stegosaurs were probably extreme examples of the often elaborate and colorful displays developed by animals to recognize fellow members of their species, according to an international team of paleontologists. 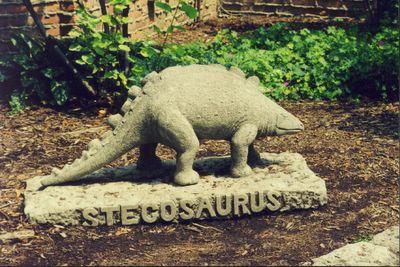 The team's analysis of stegosaur plates lends support to a growing consensus among paleontologists that the weird adornments of many dinosaurs - the horns of Triceratops, the helmet-like domes of the pachycephalosaurs, and the crests of the duck-billed hadrosaurs - likely served no function other than to differentiate species, akin to birds' colorful feather ornamentation.

"Our studies of bone histology are telling us a lot about dinosaur social behavior and lifestyle," said Kevin Padian, professor of integrative biology at the University of California, Berkeley, and a curator in the campus's Museum of Paleontology. "We cut up and compared the internal structures of stegosaur plates and the smaller scutes of their ancestors, and found that a functional explanation for these plates doesn't make sense for all the stegosaurs. So we think that they're more likely involved in some type of species recognition, as with many African antelopes - you have to be different from all animals in the area so you don't get mixed up with other species."

Padian, Main and coauthors John R. Horner of the Museum of the Rockies in Bozeman, Mont., and Armand de Ricqlès of the University of Paris report their analysis of dinosaur scutes and stegosaur plates in the spring issue of the journal Paleobiology, to be published later this month.

Read the rest of the press release HERE
Posted by Michael J. Ryan, Ph.D. at 7:48 AM