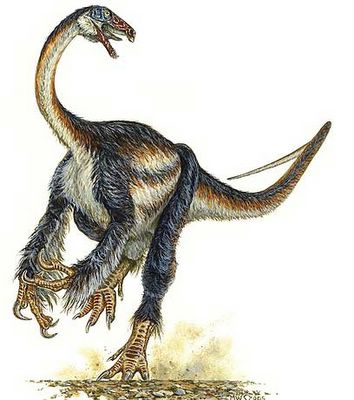 The 125-million-year-old fossils, from the dinosaur Falcarius utahensis, were discovered in a graveyard of hundreds, if not thousands, of individuals. Though it may have eaten meat, Falcarius's teeth and guts show the first signs of the species's change toward a leafy, green diet, said James Kirkland, a paleontologist at the Utah Geological Survey in Salt Lake City.

"We can see definitive features of eating plants and know its descendents were much more full-time plant-eaters," Kirkland said.

The newly discovered creature was likely cloaked in hairlike feathers and walked on two legs. Adults measured about 13 feet (4 meters) long, head to tail. They stood about 4.5 feet (1.4 meters) tall and had sharp, curved, 4-inch-long (10-centimeter-long) claws. Falcarius was a member of the therizinosaurs. These feathered dinosaurs with birdlike hips are considered among the weirdest ever discovered. Falcarius, Zanno added, is the most primitive therizinosaur yet discovered and unequivocally demonstrates that the group evolved from Velociraptor-like ancestors.

The Falcarius fossils show this transition in action among a group of dinosaurs, the birdlike meat-eating dinosaurs of the late Cretaceous period (about 140 million years ago). The finding allows paleontologists insight into long-nagging questions of evolution.

Thomas Holtz is a paleontologist at the University of Maryland in College Park. He said the Falcarius fossils are a clearer window into the shift from meat eating to plant eating than is available for equivalent transitions within other dinosaur groups. Prior to the Falcarius discovery, the likely intermediate forms between meat eaters and plant eaters "are either not yet discovered or are very fragmentary and so not recognized as such," Holtz said. That's what makes Falcarius so rare.