From the Chicago Tribune article by William Mullen:

Realizing that sunlight coming through gallery windows was damaging the Field Museum's renowned collection of dinosaur fossils, curators hit upon what was, for 1926, an extravagantly expensive solution.

They spent $140,000 to commission the world's greatest painter of extinct, prehistoric animal life to create a series of huge murals of dinosaurs that would cover the exhibit hall windows and block the light. 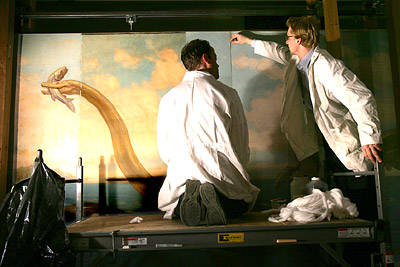 Today, dinosaur cognoscenti say, the Field's 28 murals by New York artist Charles R. Knight may be as famous and valuable as any fossil in the museum's collection, including Sue the Tyrannosaurus rex, acquired for $8.36 million in 1997.

From the time the paintings were hung in 1931, many of them have been recognizable around the world. Photos of them have been printed in science textbooks and periodicals, helping inspire some paleontologists to enter the field.

Next March, the museum plans to open "Evolving Planet," an expanded, 27,000-square-foot display on the history of life on Earth that will feature state-of-the-art, razzle-dazzle, computer-based exhibit tools.

But Knight's elegant and surprisingly accurate murals will be there, too. An art-restoration firm has spent nine months cleaning and repairing the artwork, and the project is nearly done.

After 70 years, Knight's interpretations "of how animals looked and moved aren't always perfect, but to an amazing degree, given all the new knowledge we have gleaned about dinosaurs since then, his paintings hold up extremely well," said William Simpson, the museum's fossil vertebrates collections manager.

Thanks to the ever fascinating Digital Dream Machine blog for the head's up on this item!
Posted by Michael J. Ryan, Ph.D. at 7:17 PM