This Week - Up From The Underground : 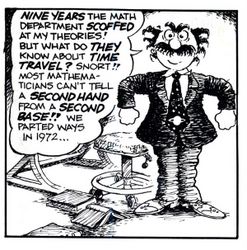 The ‘science comic’ format was revamped completely by Harvard graduate and underground cartoonist Larry Gonick’s(right) inspired THE CARTOON HISTORY OF THE UNIVERSE (launched in 1978, from Rip Off Press). The irreverent first volume of Gonick’s delightful comic, “The Evolution of Everything (including Sex!!)” set the tenor for Gonick’s highly-entertaining, highly-informative approach to a once-static form, and dinosaurs figured prominently in that debut issue. 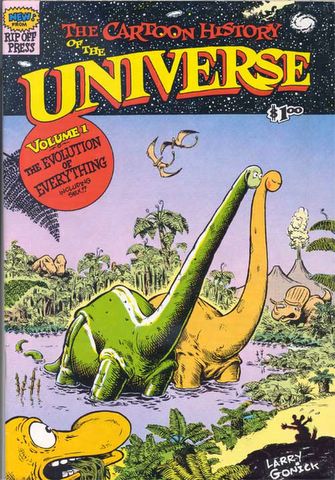 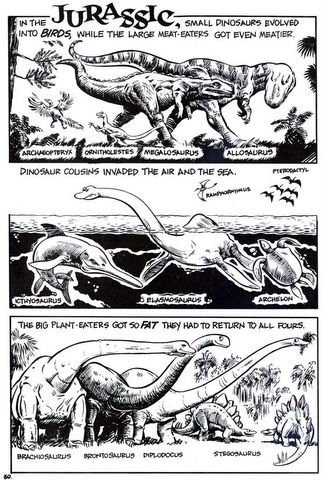 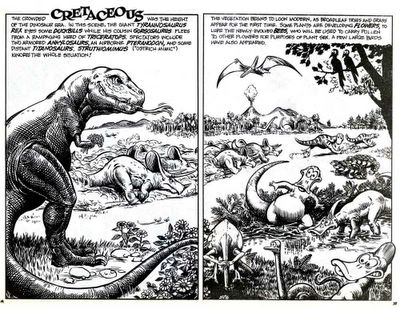 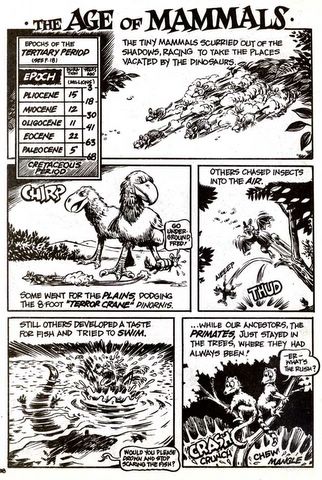 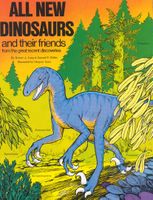 Fellow underground cartoonist Greg Irons raised the bar around the same time with his trio of coloring books for Bellerophon Press, particularly ALL NEW DINOSAURS AND THEIR FRIENDS and THE LAST OF THE DINOSAURS, which incorporated the radical revisionist thought and new discoveries in the science of paleontology. 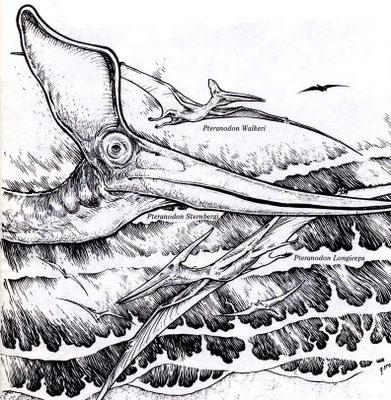 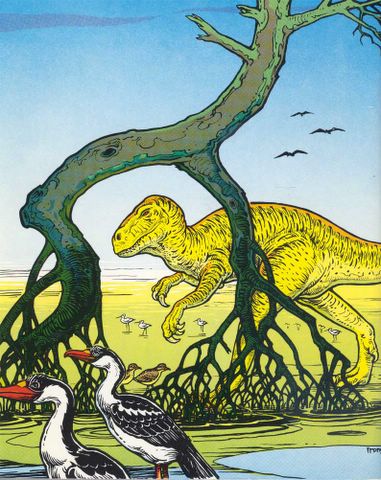 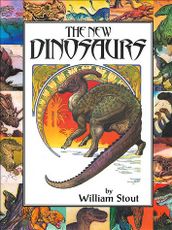 These discoveries trickled into the pop culture, aided (and in part spearheaded) by a new generation of paleo artists. Prominent among these -- particularly in cartooning circles, in part because he emerged from the California-based ‘tribe’ -- was William Stout, whose book THE DINOSAURS: A FANTASTIC NEW VIEW OF A LOST ERA (with text by William Service; Byron Preiss/Bantam/Mallard, 1981) set a new high-water mark for the field. Stout’s showcase of exquisite dinosaur portraits and tableaus reached a much wider audience, inspiring a new wave of budding cartoonists. Still, my own hard experience in the comics field (since 1976) proved that editors and publishers were reluctant to indulge a ‘pure’ dinosaur comic: super heroes, time travel fantasies, ‘lost worlds,’ and city-stomping resurrected saurians still held sway.

That all changed in the 1990s, as the growing popularity of pop science and science fiction books, magazines, TV shows, and movies featuring dinosaurs gained critical mass. You could smell the blood in the air: the pop-cultural cycle had turned anew. Dinosaurs were ‘in,’ and those of us who grew up aching to draw our own dinosaur comics could wait no longer. The wave swelled to tsunami proportions with the publication of Michael Crichton’s novel JURASSIC PARK (1990, Knopf), and only gained momentum thereafter... and comics creators, editors, and publishers climbed their surfboards to catch the wave, too.

In 1989, Dark Horse Comics announced DINOSAUR: THE RULING REPTILES from writer Tim Sullivan and artist Mike Manley; alas, it was not to be, supplanted five years later by Ricardo Delgado’s delirious, phantasmagoric full-color AGE OF REPTILES (1993-94), a textless narrative brimming with movement, action, and (of course) dinosaurs. Delgado’s mini-series proved successful enough to spawn an even more expansive sequel, AGE OF REPTILES: THE HUNT (1996). 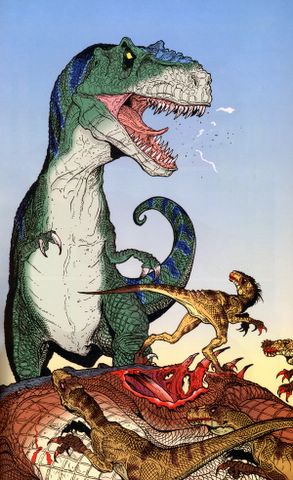 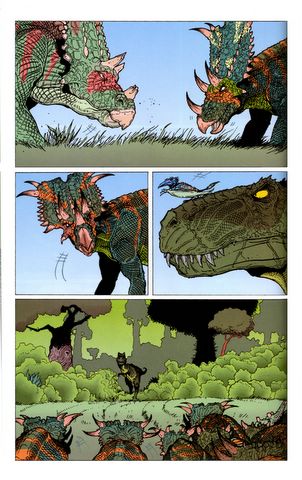 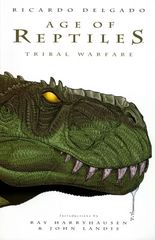 In the meantime, other publishers mounted their own ‘pure’ dinosaur comics: under their imprint “Tome Press,” the ‘never-miss-a-wave’ folks at Caliber Press rushed out the two-issue DINOSAURS: AN ILLUSTRATED GUIDE (Winter, 1991; collected edition published 1997) by Charles Yates, an unsophisticated variant composed of single-page and panel snapshots of various prehistoric species accompanied by captions of descriptive text, peppered with occasional pages of non-sequitor sequential action. More ambitious (and better financed) was Marvel Comics’ Epic mini-series DINOSAURS: A CELEBRATION (1992-93)(below), conceived and helmed by editor Steve White as a collective of self-standing comic narratives by a variety of writers and artists, grounded in the most current paleontological science available. 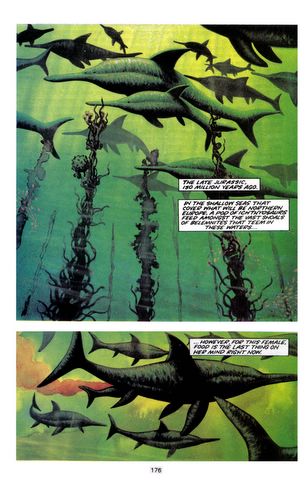 For my own part, I completed work on the first issue of TYRANT, and debuted that sadly short-lived self-published venture in 1994.

These descendants of Newman and Maxon’s “Young Earth” bred and fled quickly; as the comics industry implosion of the late 1990s rocked the field, only the fittest survived.

Read Part 7 of the series by clicking HERE.

Thanks to Chad of the Digital Dream Machine Blog for a bunch of great scans.

Steve R. Bissette is an artist, writer and film historian who lives in Vermont. He is noted for, amongst many things, his long run as illustrator of SWAMP THING for DC Comics in the 1980's and for self-publishing the acclaimed horror anthology TABOO and a 'real' dinosaur comic TYRANT(R).
Posted by Michael J. Ryan, Ph.D. at 6:09 PM