From the press release from the Field Museum posted at EurekaAlerts!: 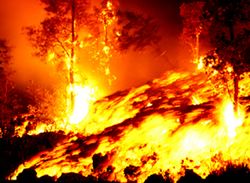 New research described in the May 26 issue of Nature provides some missing pieces in the puzzle depicting the global carbon cycle over geological time. During what geologists call "oceanic anoxic events,"(OAE) it has long been suggested that a large amount of the greenhouse gas carbon dioxide is removed from the atmosphere by millions of microscopic organisms that dwell in the oceans. They do this by trapping carbon in their bodies. When they die, their bodies rain down to the ocean depths and are buried by sediment, locking away the trapped carbon from the atmosphere for million of years.

Scientists believe that during OACs the biological activity or "productivity" of these oceanic organisms is for some reason enhanced. The events are often associated with mass extinction among many marine organisms and coincide with periods of intense global warming.

Scientists have long debated what causes OAEs. Now, a new theory holds that OAEs – in particular the Toarcian OAE, which occurred about 183 million years ago during the age of dinosaurs – are triggered by the burning of vast underground coalfields that released huge quantities of methane and carbon dioxide. These coalfields were set ablaze by the intrusion of molten rock from the Earth's crust. 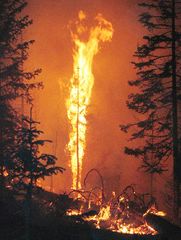 This new research sheds light on the possible consequences of the current level of consumption of carbon-based fuels. "If the incredibly high global temperatures that occurred during the Toarcian oceanic anoxic event were caused by burning a significant amount of the Earth's coal deposits within one hundred thousand years, it doesn't take much imagination to realize what will happen if we burn most of the Earth's remaining fossil fuels over the coming century, which is what we are in the process of doing," McElwain said.

The scientists, who worked on this research for more than four years, also turned up a totally unexpected result: they identified a 200,000-year interval when atmospheric carbon dioxide dropped to surprisingly low levels at the start of the Toarcian Oceanic Anoxic Event. This was probably due to the great number and activity of marine organisms at this time that effectively sucked carbon dioxide out of the atmosphere like a sponge. This drop cooled the Earth, maybe even enough to have enabled ice sheets to form and grow in the polar regions of the Arctic and Antarctic.