The latest issue of New Scientist (May 21, 2005) has an 18 page special on “The New Age of Dinosaurs: Discoveries that are redefining an era": 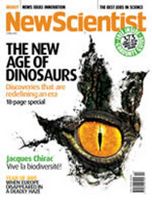 The golden age of dinosaurs
If you wanted a phrase to sum up the mood among dinosaur researchers, you could do a lot worse than those three simple words. And with good reason: in recent years a wealth of stunning discoveries have transformed our understanding of dinosaurs, the world they inhabited and the animals they shared it with. So profound have these finds been that palaeontologists have learned more about dinosaurs in the past decade or so than in the preceding 200 years. The prehistoric world you read about as a child has changed beyond measure. 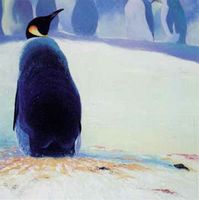 High up in the mountains, the skeleton of a large meat-eating dinosaur is gradually emerging from the rocks. Nearby are some other early Jurassic fossils that have yet to be fully excavated - an allosaur, an unidentified predator and a herbivore. It sounds like a regular day in the field, but there's one big difference. This is Mount Kirkpatrick in the Transantarctic mountains, 4 kilometres above sea level and just 600 kilometres from the South Pole.

The skeleton, a Cryolophosaurus or "frozen crested lizard", was discovered a decade ago. But the work is difficult and excruciatingly slow because sub-zero temperatures make machinery unreliable and fierce storms keep workers tent-bound for days at a time. Philip Currie, Head of Dinosaur Research at the Royal Tyrrell Museum in Drumheller, Alberta, Canada, spent a month at the site on his most recent visit and managed only six days of useful work.

It was only discovered in the early 1990's, but the fossil bonanza of China's Yixian rock formation has already transformed our knowledge of dinosaurs. 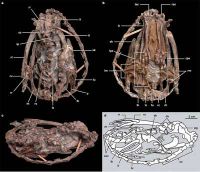 Mei long, the "soundly sleeping dragon", is small enough to hold in your two hands. Its head is tucked under its forelimb, like a sleeping bird with its head under a wing. When I saw it in Xu Xing's office at the American Museum of Natural History in New York, the long tail that was wrapped around its body when it was discovered had been removed for analysis. Otherwise the tiny bones of this little dinosaur were arranged just as they were when it went to sleep for the last time, some 125 million years ago in what is now China.

Such a complete, exquisitely preserved skeleton of a small dinosaur was something that palaeontologists could only have dreamed about a decade ago. In recent years, however, they have become rather accustomed to dream discoveries.

Image of Mei long from HERE.

How do you create a thinking, breathing creature out of an old bunch of bones? New Scientist meets the pioneers bringing dinosaurs back to life

Tim Rowe walks into his windowless, basement X-ray lab and plonks a fist-sized hunk of bronze on the table. He looks at me, smiling, waiting for me to tell him what it is. The amorphous blob looks like some sort of mangled body part, with vestiges of chambers, squashed and asymmetrical. But what? The ensuing silence is filled with a menacing buzz from Rowe's state-of-the-art CT scanner. After what seems like an age, he finally cracks and gives me a clue. "The question," he says, "is did it sing like a bird or roar like a dinosaur?" Bingo! This misshapen lump must be the metal cast of an Archaeopteryx head. And that persistently buzzing scanner holds the key to its secrets.

New Scientist is available on the newsstand now (or at least it is in the UK).
Posted by Michael J. Ryan, Ph.D. at 7:37 AM