From an article by Sue Vorenberg in the Albuquerque Tribune on-line: 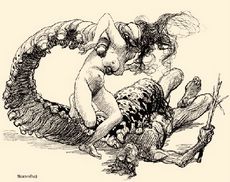 Susan Harris, an adjunct research associate at the New Mexico Museum of Natural History and Science, scoured a rocky canyon landscape near Española for reptile remains while her co-workers, including Dr. Joe Hannibal of the Cleveland Museum of Natural History, were busy nearby recovering evidence of the largest millipede ever found - an 8-foot-long creature called an Arthropleura.

The 300-million-year-old Arthropleura's huge size indicates it might have lived off small reptiles, said Spencer Lucas, the museum's paleontology curator. 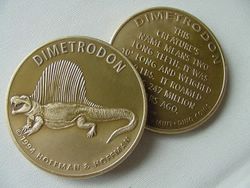 Harris got lucky as she scoured the landscape for equally old reptile bones on Friday and Saturday. She and her co-workers - once they finished recovering tracks from the big bug - found tiny backbone and leg fragments from more than one dog-sized sailback-lizard called a pelycosaur, a relative of the Dimetrodon. Evidence of the creatures suggests the small reptiles eventually evolved into therapsids, an ancestor of mammals, such as ourselves, Lucas said.

"Skulls of these creatures are extremely rare," said Larry Rinehart, the museum's preparator. "Reptile skulls have lots of little bones, and they come apart easily. Mostly what we find if we find anything are vertebrae and leg bones. If you're really lucky you might find teeth."

Read the complete article HERE
Photo from HERE.
Illustration by Heinrich Kley from HERE.
Posted by Michael J. Ryan, Ph.D. at 7:29 AM