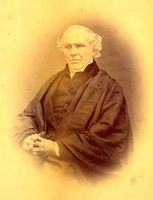 British scientist, best known for his survey of the scientific method and for creating scientific words. He founded mathematical crystallography and developed Mohr's classification of minerals. He created the words scientist and physicist by analogy with the word artist. They soon replaced the older term natural philosopher. Other useful words were coined to help his friends: biometry for Lubbock; Eocene, Miocene and Pliocene for Lyell; and for Faraday, anode, cathode, diamagnetic, paramagnetic, and ion (whence the sundry other particle names ending with -ion).

Whewell believed that each branch of science possessed a fundamental idea, for example in crystallography it was that of symmetry. In 1834 he attempted to construct an appropriate catalogue for Faraday with electricity, believing that the idea of electrical polarity was fundamental to chemical understanding. Whewell had an amazing ability to accumulate knowledge, and held a high position of authority among the scientific writers of the day.