Astrobiology Magazine -- At least 50 percent of the world's species, including the dinosaurs, perished 65 million years ago. A large meteorite struck Mexico's Yucatan Peninsula around the same time, and most scientists blame this impact for the mass extinction. 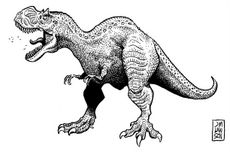 Yet there is nothing that directly links meteorite impacts with the extinction of entire species. Scientists can recite a long list of the devastating environmental consequences of a large meteorite impact, but they cannot prove these effects have led to the simultaneous loss of life around the globe. Answering the question of how and why such a large variety of species died out at the same time is one of the greatest mysteries in paleontology.

While the exact reason for the Cretaceous-Tertiary (K-T) mass extinction is still under debate, other past extinctions have been clearly linked with climate change. As species become increasingly specialized to their environment, a substantial or sudden change will tend to threaten their survival. The Earth has gone through many cycles of extreme warming and cooling in its history, with an associated rise and fall of species.

Could such climate change have played a role in the K-T extinction? One proponent of this theory is Dewey McLean, a geologist at Virginia Polytechnic University who first published the idea in the 1970s. McLean thinks the Chicxulub impact in Mexico just added more stress to an environment that was already upset by the release of copious amounts of volcanic gases. 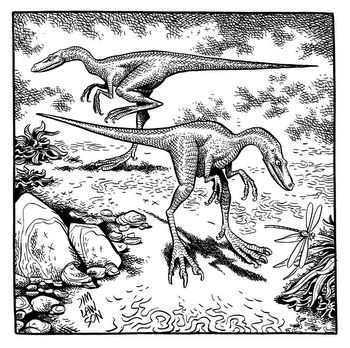 His culprit for the outgassing is the Deccan Traps, an ancient lava flow in west central India. This flood basalt volcanism, says McLean, upset the Earth's carbon cycle and led to long-term global warming. McLean suspects the dinosaurs gradually became extinct through heat-induced reproductive failure. He says that the higher temperatures, along with pH changes in ocean water, led to the extinctions seen in marine life at the time.

But Simon Kelley, a geologist at Open University in England, disagrees that the volcanic gas from the Deccan Traps could have caused such warming. He says the traps could have released, at most, only 2 percent of the carbon dioxide (CO2) already in the atmosphere -- not enough to trigger global warming. In addition, he notes that volcanoes release sulfur dioxide (SO2), which causes cooling rather than heating. "The most recent example of massive volcanism, the Laki eruption of 1783-4 in Iceland, caused cooling in Europe and the northern USA, not heating," says Kelley. "The bitter winter in Paris was documented by Benjamin Franklin, envoy from the newly formed United States of America. Although SO2 is washed out rapidly, the signal of volcanism should be a combination of the both cooling and heating."

Illos (C) Jim Lawson. Read the article about him this Friday.
Posted by Michael J. Ryan, Ph.D. at 7:05 PM