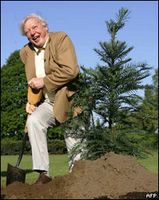 A Jurassic tree dating from the dinosaur age and thought to have been extinct for two million years has been unveiled by Sir David Attenborough (left). The tree was found by chance by a National Parks officer as he backpacked in Australia and the discovery astonished botanists worldwide who thought it had died out millions of years ago.

Sir David, who planted the tree, said: "How marvellous and exciting that we should have discovered this rare survivor from such an ancient past. It is romantic, I think, that something has survived 200 million years unchanged."

The Wollemi Pine, discovered 11 years ago, has now taken its place in the Kew Arboretum among the rarest trees in the world. Parks officer David Noble stumbled across it on one of his abseils, as he travelled through the Blue Mountains in Australia. He noticed some unusual foliage and took a sample back to Sydney. Scientists there confirmed it was a new genus of an ancient plant species, called Araucariaceae, which had existed at the time of dinosaurs.

Read the rest of the story HERE.