From the latest issue of The Journal of the Experiemental Biology comes a series of articles about the paradise tree snake that actually glides between trees in Singapore. 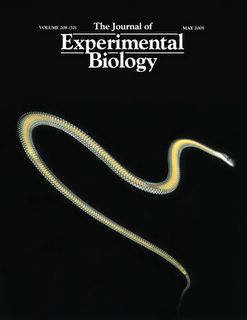 A nice summary by Cynthia Wei of the new research is given in this article:

"[Lead author] Socha found that paradise tree snakes are true gliders, and pretty good ones at that. Rather than simply parachuting to the ground, these cylindrical-bodied snakes somehow generate enough lift to carry them across a substantial horizontal distance. Socha suspected that the unusually dynamic flight behavior of the snakes might be responsible; while flying, the snakes create distinctive S-shaped aerial waves that travel from head to tail. To test this, he correlated the snakes' wave amplitude and frequency with flight performance variables. He found that snakes with the greatest combination of body length and wave amplitude (relative to body size) travelled fastest; but the largest snakes were not necessarily the ones making the biggest waves. While wave amplitude is important, Socha found that the frequency of these waves appears to play little or no role in producing aerodynamic forces during flight. So why do snakes undulate so frequently? Socha suggests that it may provide stability, keeping the snakes from spinning out of control."

Read the full article HERE
You can read the abstracts of the articles by clicking on the links below: