Here at the Palaeoblog we don’t just write about paleontology - we do it!

Over the past few weeks the warming weather has let the Cleveland Museum of Natural History’s Department of Vertebrate Paleontology get out and prospect for new fossils revealed by erosion since last year’s field season. This typically involves walking along the river banks and scanning the shales for the tell-tail sign of black bone that is a new fish fossil.

Thanks to a large group of dedicated staff and volunteers, the VP Dept. has made a number of nice finds already this field season, including the median dorsal plate from a Dunkleosteous (seen below) that was collected and is now being prepared back at the museum. 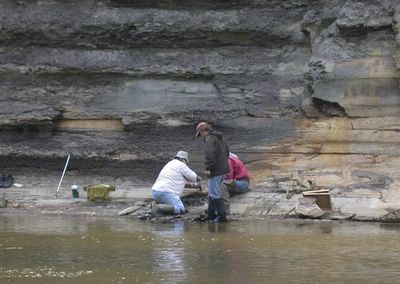 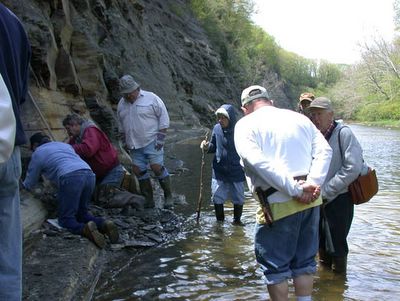 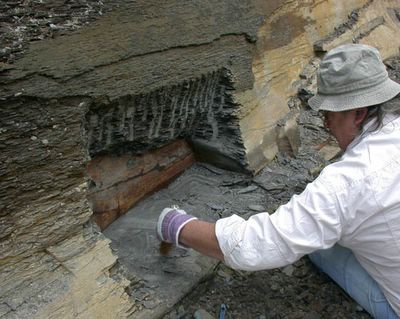 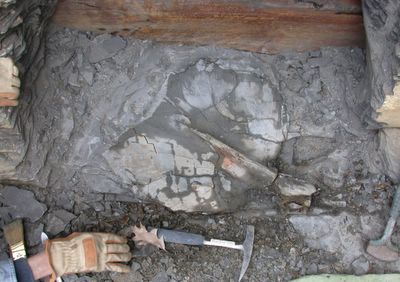 Here’s some more info about one of the many areas we work in from www.coastalohio:

“The tall shale cliffs and broad floodplain meadows of the Rocky River Reservation were home to the Whittlesey tradition some 1000 to 1640 years ago. Erie tribes once lived here as well, but proof of life more than 300 million years ago exists among the shale cliffs including the 20-foot-long Dunkleosteous, a shark-like creature who swam over this land during the Devonian Period 350 million years ago. Fossilized remains were found in shale cliffs just north of Rocky River Nature Center. The upper reaches of the cliffs are Cleveland shale, while the lower cliff is made of Chagrin Shale.”

FYI, the CMNH sells research and display quality casts of Dunkleosteous (as well as the holotype skull of the 'pygmy T. rex', Nanotyrannus).
Posted by Michael J. Ryan, Ph.D. at 8:47 PM