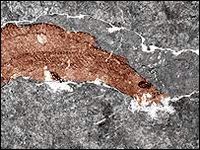 Fossils of an ancient fish - dating back 450 million years, when the creatures had neither bones nor teeth - have been found in South Africa. The finds, which are 50 million years older than any other fossil fish in Africa, will help provide a "missing link" in the evolution of early fish. The first of eight fossil specimens was dug up in 1994, and named "Nelson" after the newly elected president. The research is being conducted by a UK-South African team of scientists. "These new fish finds are among the most exciting ever," said Richard Aldridge of the University of Leicester. People may wonder how we know these fossils are fishes, when we have no bones with which to identify them."

The animals lived during a time when Africa was in an ice age, and before any animals had colonised the land. According to the team, they lived in a shallow sea fed by melt waters from receding ice-sheets. Although the researchers are still in the early stages of analysing the fossils, they think the fish might have been swimming scavengers. "They had no teeth, so they might not have been predators," Professor Aldridge told the BBC News website. "They may have been scavengers - they would have fed on detritus probably.