From the Washington University in St. Louis press release at Eureka Alert!:

Analysis of approximately 41,000-year-old human remains found in France suggests that Neandertals may have become regionally mobile earlier than scientists once thought. 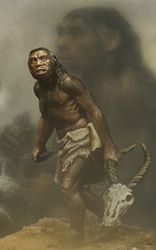 Cédric Beauval and colleagues from Université Bordeaux 1 in France, Max Planck Institute in Germany, and Washington University in St. Louis, conclude that the human femur fragment found in 2002 in the cave of the Rochers-de-Villeneuve comes from a Neandertal, based on its shape and mitochondrial DNA. Its age places it at the end of the Middle Paleolithic archeological period, just before modern humans arrived in Europe.

"In Europe, with the transition from Neandertals to modern humans, anthropologists have long argued that major behavioral changes and major improvements in adaptation began to take shape with modern humans," said Erik Trinkaus, Ph.D., Mary Tileston Hemenway Professor of Anthropology at Washington University and co-author of the paper.

"One of the changes that has been documented with the transition from Neandertals to modern humans was that people became more mobile and their territories became much larger. They became less locally focused and more regionally focused," Trinkaus said.

In addition, the cave was a hyena den at about the same time that the humans lived in it, the authors say. Archeological evidence indicates that humans processed carcasses of the same animals as the hyenas, with some animal bones showing both cut marks from human tools and tooth marks from hyenas. Additionally, the human femur was gnawed by carnivores, probably hyenas. This shows that close competition for food and space persisted through the Middle Paleolithic among these Neandertals.