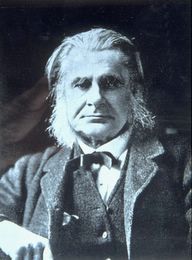 Thomas Huxley started his scientific career as a marine biologist while a ship's surgeon. Later he turned to the study of fossils, especially of fishes and reptiles. He is best known as the main advocate of Charles Darwin's theory of evolution. In 1860, one year after The Origin of Species was published, Huxley debated with the bishop of Oxford, Samuel Wilberforce, at the British Association for the Advancement of Science. During the discussion Wilberforce asked whether he traced his ancestry to the apes. Huxley's withering reply was that given the choice of a miserable ape and a man who could make such a remark at a serious scientific gathering, he would select the ape. Huxley coined the word agnostic to describe his own beliefs.

More on Huxley from the University of California Museum of Paleontology HERE.
Posted by Michael J. Ryan, Ph.D. at 12:13 PM