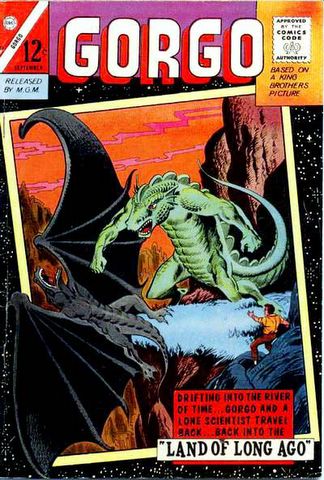 As “Young Earth” continued in every issue of TUROK, competing publishers jumped on the monster-boom bandwagon of the early 1960s, spicing their giant monster comics with the occasional back-up strip dedicated to prehistoric animals and early man. 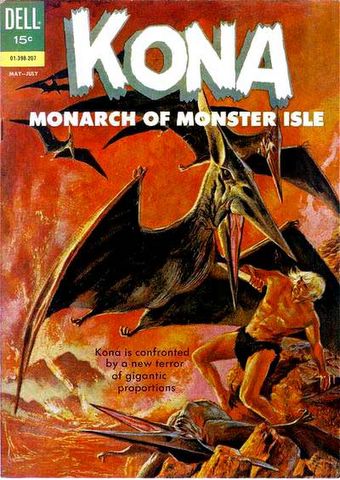 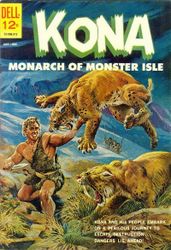 None of these approached the quality of either “Young Earth” or the Classics Illustrated comics; Dell’s own mercurial KONA, MONARCH OF MONSTER ISLE (debuting early in 1962) was drawn by Sam Glanzman and brimmed with imaginative renditions of dinosaurs, mutants (below), and monsters, but only its second issue (May-July, 1962) featured a perfunctory one-pager dedicated to dinosaurs. 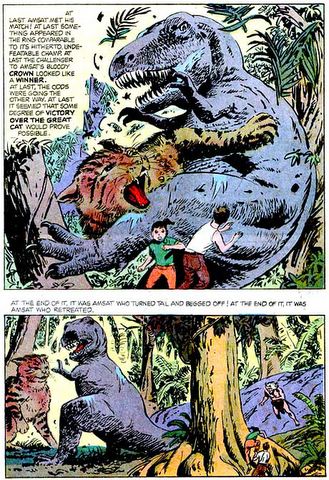 Furthermore, editorial standards at, say, Charlton Comics were much less exacting than those at Dell, Gold Key, or Gilberton. Proper spelling (much less any semblance of ‘scientific accuracy’) was a struggle on the best of days. Among the misspellings we young comic-reading punks particularly prized was “A Vistit to Earth” (in GORGO #23, Sept. 1965). Thus, at the age of ten, “vistit” entered our vocabulary as a synonym for ‘breast’ that was vague and disorienting enough to be spoken aloud in the vicinity of adults without provoking a slap to the head. 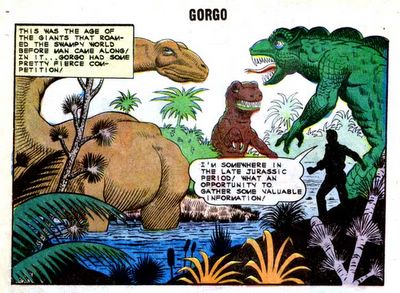 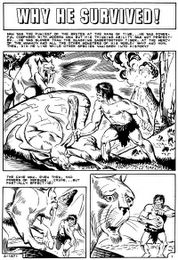 The prehistoric ‘back up’ comics in the pages of Charlton’s GORGO and KONGA comics were, and remain, laughable curios, of interest primarily for their art -- or their risible crudity, which invited derisive snorts from kids and outright laughter from older readers. Much as I loved Steve Ditko (left) and the Montes/Bache art in both titles, there was no mistaking the abysmal (and always uncredited) rush-jobs most of the back-up pieces truly were, from GORGO #3’s slap dash “Men and Monsters” (Sept., 1961) onwards. However rough and ready the art might have been in Ditko’s rare appearance among these back-up strips (KONGA #3, 1961), there was no mistaking his work: it was alive and invigorating, even at its silliest (e.g., a caveman smashing out the teeth of an attacking saber-tooth cat in a cartoonish gag in “Why He Survived,” KONGA #8, Sept. 1962). 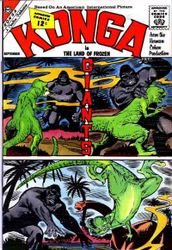 The rest of the back-up stories seemed anonymous and disturbingly amateurish; our first intimations, really, that mere mortals were responsible for the comics we devoured. Heck, even Don Perlin’s work seemed a breath of fresh air by compare (“And Then Came Man,” KONGA’S REVENGE #2, Summer 1963). The complete lack of research evident in a strip like “The Beginning” (REPTISAURUS SPECIAL EDITION #1, Summer, 1963) yielded delirious creatures unlike any that ever lived (below) -- including bizarre putty-like fishes with fleshy, eyeless faces and a cross between a unicorn and a dragon that was supposed to represent the first mammals -- and the featureless phallic Brontosaur of “The Victor” (KONGA #19, Sept. 1964). 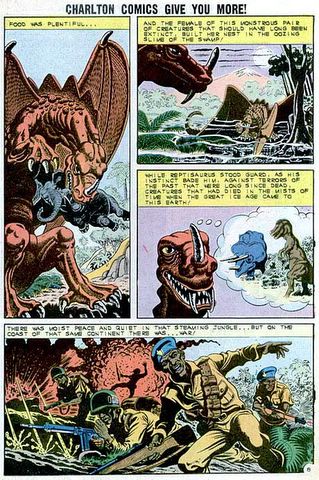 The stiff, stodgy art for “From Beyond Time” (GORGO #13, June 1963) seemed to imply that Brontosaurs (the outmoded moniker for Apatosaurus) mated by rubbing their necks together (“...but they were young and in their prime...”), provoking some sniggering on the playground at the close of that school year (it could also be argued that the latter piece also fueled my own dinosaur comics, as a classmate then told me -- at the age of eight -- “Jeez, Bissette, you draw better dinosaur comics than this!”). 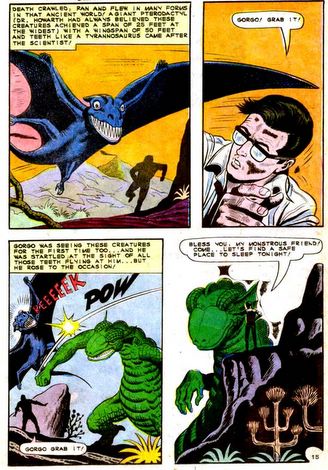 Like I said, it was slim pickings for a dinosaur-comic junkie. I made due with the rock-solid TUROK, the hallucinogenic KONA, and the Robert Kanigher lunatic-scripted, Andru/Esposito-illustrated “The War That Time Forgot!” in STAR-SPANGLED WAR STORIES (below), and dreamed about drawing my own honest-to-God dinosaur comics one day.

As time demonstrated, I was hardly alone. 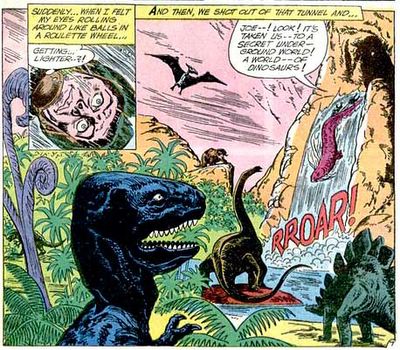 Next Week: Part 7 - Up From The Underground.

Read Part 6 of the series by clicking HERE.

Steve R. Bissette is an artist, writer and film historian who lives in Vermont. He is noted for, amongst many things, his long run as illustrator of SWAMP THING for DC Comics in the 1980's and for self-publishing the acclaimed horror anthology TABOO and a 'real' dinosaur comic TYRANT(R).
Posted by Michael J. Ryan, Ph.D. at 7:22 AM