Jesse Marsh illustrated what might be the first ‘dinosaur pin-ups’ in Dell’s long-running comic book series adapted from Edgar Rice Burroughs’ TARZAN. These appeared shortly after the series’ maiden dinosaur epic “The Valley of the Monsters” (TARZAN #7, Jan.-Feb. 1949). The science was dubious at best, and the saurians were graced with Burroughs’ (and comic book writer Gaylord Du Bois’) resonant invented monikers for familiar dinosaurs -- tyrannosaurs were ‘Garths,’ triceratops were ‘Gryfs,’ pterosaurs were ‘Thidpars,’ etc. These were the creatures that roamed the lost land of Pal-Ul-Don, in which “The Valley of the Monsters” was nestled. Here, dinosaurs still roamed and the surrounding tribal people bred their unusual mounts: three-horned ‘Gryfs,’ wingless ‘Dyals,’ and other antediluvian creatures. From its earliest installments, almost every issue of TARZAN offered single-page ‘pin-ups’ offering tidbits of lore about Tarzan’s world, including the reptilian monsters of Pal-Ul-Don. 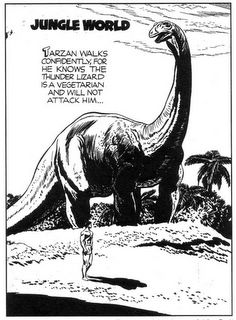 Though it was and is fashionable to debunk Marsh’s comic art as ‘primitive,’ he remains to my mind one of the true masters of his era -- and no comic artist before Marsh ever rendered animals with such tactile, believable life. His depictions of African and imaginary animal life seemed quite ‘real’ to me as a young reader, and they still do. His gryfs, garths, thidpars and dyals were utterly lifelike in an oddly blunt, pragmatic, primal way that lent gravity to the wildest of Du Bois’ Burroughs-inspired scripts. 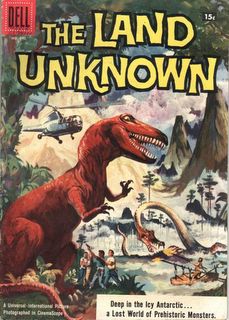 . The dinosaurs of other Dell comics I collected as a child -- Alex Toth’s efficient but unconvincing saurians for the Dell comics adaptations of the sf films THE LAND UNKNOWN (1957) and THE LOST WORLD (1960), the uncredited artist who illustrated the comic version of Irwin Allen’s documentary THE ANIMAL WORLD (1956) -- seemed pale indeed in the shadow of Marsh’s meaty saurians I still savor Marsh’s work on Dell’s movie comic DINOSAURUS! (1960). However fleeting, his single-page strips featuring dinosaurs in their own time and/or environment were savored snapshots of a dinosaur comic that might have been -- but wasn’t. 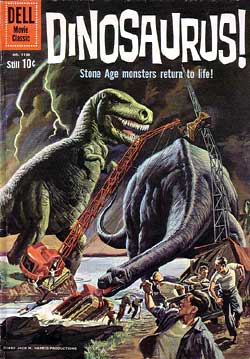 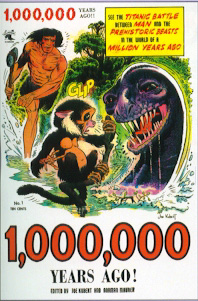 Contemporary with the early issues and success of Du Bois and Marsh’s TARZAN series for Dell, Joe Kubert followed suit in a more ambitious manner in his TOR comics series, which debuted in 1,000,000 YEARS B.C. (St. John, 1953Joe’s ‘straight, no-chaser’ revamp of “Alley Oop” was dead-serious and brimming with action, and from its first issue featured one-page solo portraits of the dinosaurs Kubert anachronistically co-starred with his titular caveman hero. Joe also scribed more ambitious informational narrative pieces, such as “The Story of Evolution” (in 3-D TOR, 1953), detailing the development of the Wooly Mammoth.

Along with Kubert’s distinctively muscular pen, brush, and ink renditions were the comparatively static, precision dinosaur illustrations by Kubert’s friend and peer Russ Heath. These dinosaur portraits were beautifully done, the tidbits of paleontological info in the captions lending verisimilitude to the entirety of Kubert’s prehistoric fantasy. But -- these still weren’t comics narratives. The key sequential narratives in TOR were dedicated to Tor’s adventures, and those of a modern boy whose dreams plunge him into the imaginary caveman-and-dinosaur era of Kubert’s comic (“Danny Dreams”). 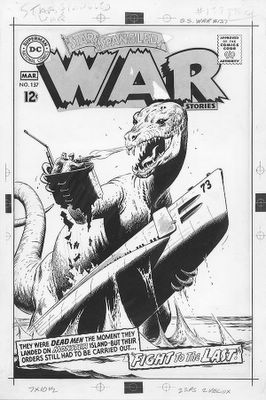 O.K., it's not TOR, but it does feature some great dino-art by Russ Heath

Thus, the short ‘science’ features and one-pagers were again glimpses of a dinosaur comic that “could have been.” Joe’s later return to TOR -- in the pages of his adventurous but short-lived publishing experiment SOJOURN (1976-77), and his later TOR revival for Marvel’s second Epic Comics line ‘Heavy Hitters’ (1993) -- was leaner, meaner, and brimming with violent action featuring dinosaurs and wholly imaginary primordial creatures, but it still wasn’t a true dinosaur comic.

Next Week: Part 4 - The first of two parts on Turok, Son of Stone.

Read Part 2 of the series is HERE.

Steve R. Bissette is an artist, writer and film historian who lives in Vermont. He is noted for, amongst many things, his long run as illustrator of SWAMP THING for DC Comics in the 1980's and for self-publishing the acclaimed horror anthology TABOO and a 'real' dinosaur comic TYRANT(R).
Posted by Michael J. Ryan, Ph.D. at 8:08 AM