A review of the evidence supports the conclusion reached by Gardiner and Currant in 1996 that the hoaxer was Martin Hinton, who worked in the Geology and Zoology Departments of the Natural History Museum throughout the Piltdown affair. This was based primarily on the discovery in 1978 of a cabin trunk in the loft space immediately above what had been the office of the Keeper of Zoology which post Hinton occupied between 1936 and 1945. 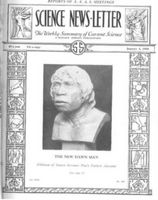 This contained material similarly stained to that discovered at Piltdown, while several of the pieces had also been whittled in an identical fashion to the last find at Piltdown the notorious 'cricket bat'. Additional proof came from Hinton's executor who discovered eight human teeth varyingly stained in a tobacco tin of Hinton's. These revealed that the forger used two methods for staining his material, one of which involved decalcification, a process which converted apatite into gypsum, the other of which did not. The material in the trunk was stained using the first method, the teeth obtained from his executor, the second. The analyses of the contents of the trunk (carried out in 1995-6) and of the tobacco tin (1997-8) are reported for the first time.