From the latest issue of Geology:

During the Late Cretaceous (65–75 million years ago), the exotic island of Madagascar was home to a diverse assortment of animals, including dinosaurs, crocodiles, mammals, and birds. Bones and teeth of these ancient creatures literally spill from the easily eroded grasslands in the northwestern portion of the island, near the village of Berivotra. This study concludes that the extraordinarily abundant and well-preserved fossils from the Berivotra area of Madagascar were entombed by multiple fine-grained debris flows. The debris flows are linked to exceptional rainfall events that prompted erosion and flooded ancient riverbeds again and again with sediment-laden slurries rich with clay and sand. 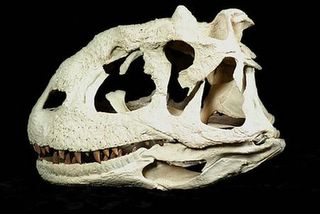 These extraordinary burial events shielded vertebrate remains from destructive surface processes and also afforded some protection for soft tissues. The remarkable and recurrent association of bone beds and debris flow deposits in ancient Madagascar likely reflects marked seasonality in this Late Cretaceous terrestrial ecosystem. It was clearly a tough place to make a living, and prolonged dry spells and their associated hardships prompted mortality. Animals big and small sought refuge in and around drying river courses as resources dwindled. There they died, and their carcasses were picked clean by both vertebrate and insect scavengers. Subsequent drenching rains set debris flows in motion to capture the accumulated death records. Today, the fossilized remains of these animals afford novel insights into life and death in the Late Cretaceous world.

Ray and his colleagues, including Scott Sampson from the University of Utah, have spent a number of field season in Madagascar, and recovered many important specimens, including the theropod Majungatholus(above).
Posted by Michael J. Ryan, Ph.D. at 7:52 AM