The Face Of The Earliest Human 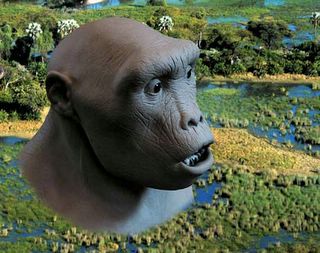 From Ted Chamberlain and Sean Markey at National Geographic News.com:

Does this facial reconstruction depict our earliest known human ancestor? In 2002 paleontologists digging in Chad, Africa, unearthed a skull and other seven-million-year-old fossils of Sahelanthropus tchadensis. Bent by millennia of interment, the skull had a deformed shape that made it tough to tag as totally human.

Now new fossil finds and a high-tech skull reconstruction (not shown) strongly suggest the species was human, after all. This would make it the oldest known human ancestor.

The breakthrough came when researchers recently discovered two new jawbones and a specialized tooth near the site of the original fossil find. A computer reconstruction revealed that these skull pieces fell into place when arranged along the lines of a human skull. Their alignment also hinted at a spine connection typical of upright-walking primates—in other words, humans and human ancestors.