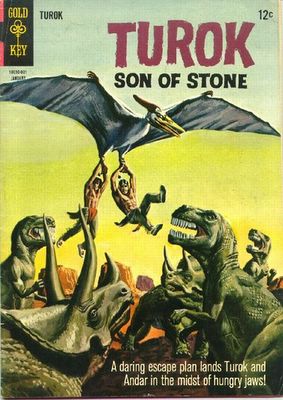 The first true 'dinosaur comics' to appear regularly on the newsstand evolved within a title that was arguably inspired by TOR, fusing the increasingly-popular western comics genre with the lively 'caveman-and-dinos' universe. Dell Comics' TUROK, SON OF STONE debuted in Dell Four Color #596 (1954), trapping "two Indian braves' Turok and Ander in a remote "lost valley" in the American west, where they would remain for over two decades. My friend and fellow Kubert School classmate Fred Greenberg once described TUROK as "the first existential comic," and he's right; Turok and Ander were forever trapped in their lost valley, and knew they'd never escape, but had to keep trying to find a way out nevertheless.

The debut issue was drawn by TARZAN comic strip artist Rex Maxon, who occasionally returned to the series. But Maxon's steady and lasting contribution to TUROK -- and, though no one has ever before acknowledged it, to comics history and the evolution of the dinosaur comic genre -- was launched without fanfare in TUROK #8 (June-August, 1957). 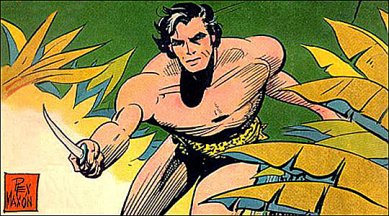 Maxon's stint on this first TUROK adventure featured a T. rex clearly patterned after the portly blue carnosaur in a Rudolph Zallinger painting, but Maxon's brisk, lively art for the rest of his TUROK tenure (particularly the 'Young Earth' stories) did not slavishly rely upon his reference files, nor did he succumb to the temptation to lend his prehistoric creatures expressive faces contrary to their true natures and forms.

This skill came to the fore in Maxon's delineation of #8's four-page 'back-up' strip "Danger at the Nest," in which a mother Pteranodon defends her treetop nest from a raiding Dimetrodon. The uncredited script -- presumably by series writer Paul S. Newman -- was a model of efficient, unpretentious storytelling, and Maxon's artwork rendered its prehistoric creatures without a hint of anthromorphizing. 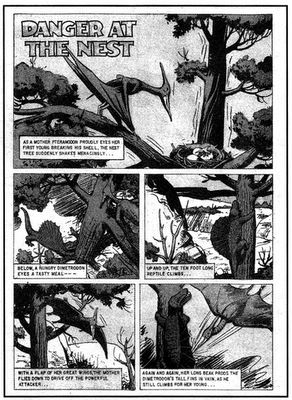 But within this simple narrative, something unique was born: this was not an illustrated text page, or dressed-out pop science tidbits, but a fully-realized narrative. The fusion of text captions and sequential art told the tale with direct economy, clarity, and mounted genuine suspense without cheating. Note, too, the spare but elegant use of just two word balloons, used not to lend the pterosaurs speech, but to indicate (on the story's second page) the sound the mother makes feigning injury to lure the predator away from her nest -- a cry echoed neatly by her hatchlings' call for food in the final panel. Thus, the 'sound' evoked by the use of just two word balloons enhanced the kinetic "you are there" immediacy of the strip. 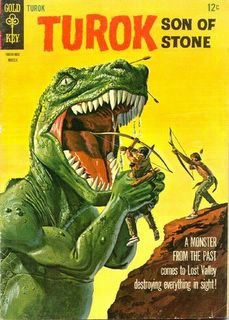 Furthermore, in both text and art, these were animals acting like, and presented as, animals. Without stretching believability or relying on the sort of devices comics usually required in stories involving animals (i.e., human narrators, framing panels featuring human characters, lending speech or human thought to the animal protagonists, etc.), the writer invited the reader to empathize with these creatures, particularly the protagonist. Sly references are made to emotions, but none so emphatically as to break the spell. This mother Pteranodon "proudly eyes here first young breaking his shell...," "...realizes she cannot fight off the lumbering reptile -- her only hope is to lure him away...," "...cleverly back[s] away, just out of his range...," "...as she is about to fly off triumphantly, her wing is caught...," "...sees with relief the Dimetrodon hunting far from her nest...," and "...wonders how her first hatched young is making out...". 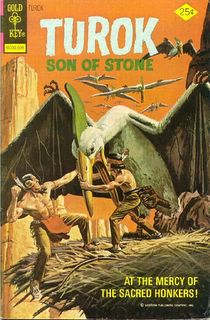 Even the ravenous carnivore is afforded a moment of empathy, as he "eagerly" scrabbles toward his prey. Thus, for the first time, prehistoric animals moving within their own environment were shown interacting, capable of a range of emotions -- pride, calculation, hope, cleverness, triumph, disappointment, relief, and wonder -- rendered in primal enough terms to remain animals.

Next Week: Part 5 - The second of two parts on Turok, Son of Stone.

Read Part 3 of the series by clicking HERE.

Steve R. Bissette is an artist, writer and film historian who lives in Vermont. He is noted for, amongst many things, his long run as illustrator of SWAMP THING for DC Comics in the 1980's and for self-publishing the acclaimed horror anthology TABOO and a 'real' dinosaur comic TYRANT(R).
Posted by Michael J. Ryan, Ph.D. at 8:52 AM