From the excellent evolution pages at the University of California at Berkeley web site:

Edward Drinker Cope was an American paleontologist and evolutionist. He was one of the founders of the Neo- Lamarckian school of evolutionary thought. 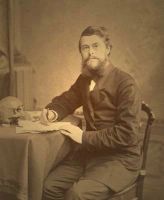 Cope led many natural history surveys in the American West for the precursors of the U.S. Geological Survey. He made many important finds on his trips, including dinosaur discoveries in western North America. Although he is best remembered today for his prolific description of new dinosaur species, and for his notorious ‘fossil war’ with rival O. C. Marsh, Cope was primarily a herpetologist and mammalogist who described many genera and species that are still used today.
Posted by Michael J. Ryan, Ph.D. at 8:18 AM