From a press release from the University of Colorado: 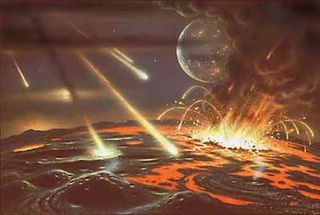 A new University of Colorado at Boulder study indicates Earth in its infancy probably had substantial quantities of hydrogen in its atmosphere, a surprising finding that may alter the way many scientists think about how life began on the planet.

Published in the April 7 issue of Science Express, the online edition of Science Magazine, the study concludes traditional models estimating hydrogen escape from Earth's atmosphere several billions of years ago are flawed. The new study indicates up to 40 percent of the early atmosphere was hydrogen, implying a more favorable climate for the production of pre-biotic organic compounds like amino acids, and ultimately, life.

The paper was authored by doctoral student Feng Tian, Professor Owen Toon and Research Associate Alexander Pavlov of CU-Boulder's Laboratory for Atmospheric and Space Physics with Hans De Sterck of the University of Waterloo. The study was supported by the NASA Institute of Astrobiology and NASA's Exobiology Program. "I didn't expect this result when we began the study," said Tian, a doctoral student in CU-Boulder's Astrobiology Center at LASP and chief author of the paper. "If Earth's atmosphere was hydrogen-rich as we have shown, organic compounds could easily have been produced."

Scientists believe Earth was formed about 4.6 billion years ago, and geologic evidence indicates life may have begun on Earth roughly a billion years later. "This study indicates that the carbon dioxide-rich, hydrogen-poor Mars and Venus-like model of Earth's early atmosphere that scientists have been working with for the last 25 years is incorrect," said Toon. In such atmospheres, organic molecules are not produced by photochemical reactions or electrical discharges.

The new study indicates the escape of hydrogen from Earth's early atmosphere was probably two orders of magnitude slower than scientists previously believed, said Tian. The lower escape rate is based in part on the new estimates for past temperatures in the highest reaches of Earth's atmosphere some 5,000 miles in altitude where it meets the space environment.

While previous calculations assumed Earth's temperature at the top of the atmosphere to be well over 1,500 degrees F several billion years ago, the new mathematical models show temperatures would have been twice as cool back then. The new calculations involve supersonic flows of gas escaping from Earth's upper atmosphere as a planetary wind, according to the study.

Despite somewhat higher ultraviolet radiation levels from the sun in Earth's infancy, the escape rate of hydrogen would have remained low, Tian said. The escaping hydrogen would have been balanced by hydrogen being vented by Earth's volcanoes several billion years ago, making it a major component of the atmosphere.

In 1953, University of Chicago graduate student Stanley Miller sent an electrical current through a chamber containing methane, ammonia, hydrogen and water, yielding amino acids, considered to be the building blocks of life. "I think this study makes the experiments by Miller and others relevant again," Toon said. "In this new scenario, organics can be produced efficiently in the early atmosphere, leading us back to the organic-rich soup-in-the-ocean concept."