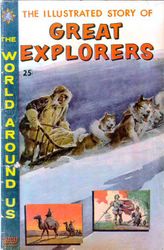 The next significant landmark dinosaur comic emerged in 1959 from a rather unlikely source; and it becomes, somewhat, part of my own story. For two decades, Gilberton Publications had built their publishing empire entirely upon comic book adaptations of classic literature: the venerable and celebrated Classics Illustrated series. By the late 1950s, Gilberton had diversified, enhancing its line with the fairy-tale fueled CLASSICS ILLUSTRATED JUNIOR adaptations, and the encyclopediac THE WORLD AROUND US which offered “a World of Adventure, Travel & History” to more studious comic book readers. This monthly educational series offered 72-page squarebound overviews on a variety of subjects, from military histories (THE ILLUSTRATED STORY OF THE MARINES; THE COAST GUARD; etc.) and animals (THE ILLUSTRATED STORY OF HORSES; DOGS; etc.) to more esoteric fare (THE ILLUSTRATED STORY OF PIRATES; GHOSTS; MAGIC; etc.). 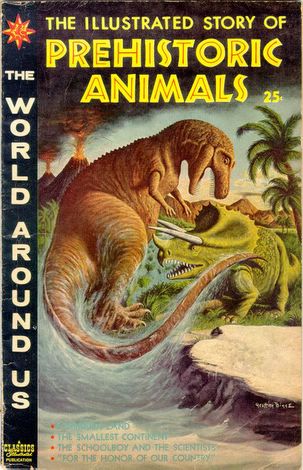 I was a mere lad of four years when the cover of the November, 1959 issue of THE WORLD AROUND US #15 leaped off the comic book racks at Towne’s Market in Essex Junction, Vermont. Beneath the bright yellow masthead THE ILLUSTRATED STORY OF PREHISTORIC ANIMALS was a vivid painting (signed by one Geoffrey Biggs, or Bigge) of a Tyrannosaurus rex and a Triceratops locked in mortal combat as twin volcanoes erupted in the background. It was the first comic I recall wanting; my dear mother obliged, and my life forever changed.

This new artifact was a thing of beauty to me (and, in hindsight, it still is). Dinosaur children’s books had been a fixture of my existence, but this was something new, and somehow more vital, more alive, than the most beloved of all my dino books. I poured over its pages, brooded over its single most glaring error (the coelacanth in the very first story, “The Fish That Never Died,” was erroneously drawn as an icthyosaur -- my, how that bothered me), labored over my own crude copies of the art in my favorite panels, read and reread the comic, as best as I could read at age four. I wore out my first copy so quickly that mom still had time to buy a replacement copy off the newsstand, and was sorely disappointed when the next issue of THE WORLD AROUND US wasn’t dedicated to more prehistoric material -- it was (choke!) THE ILLUSTRATED STORY OF THE CRUSADES -- leaving me to make due with TUROK as usual.

Though written and rendered for the most part in the staid mode of most Gilberton titles, lacking the immediacy and electricity of the TUROK “Young Earth” series, THE ILLUSTRATED STORY OF PREHISTORIC ANIMALS formalized and legitimized the dinosaur comic. However restraining the Gilberton editorial templates, among the artists illustrating the dry-as-chalk-dust narratives were masters like Al Williamson, George Evans, Reed Crandall, and an artist who became a personal favorite, Sam Glanzman. Al Williamson and George Evan’s rendition of “Death of the Dinosaur” seemed positively lush and grandiose, almost operatic in its mournful undertone of irrevocable loss: the final panel of dinosaur life, as paired Trachodons and Triceratops move toward a distant river, haunted me like no other comic panel ever had. 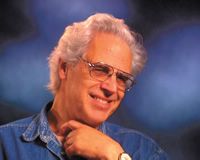 [Years later, when I was all grown up (well, mostly) and working professionally as a comic book artist, I had the rare pleasure of meeting and spending some time with Al Williamson (right; art below). When I made the grievous error of admitting to Al how much his pages in THE ILLUSTRATED STORY OF PREHISTORIC ANIMALS meant to me, he grumbled, “okay, so how old were you then?” When I told him, he raged, “I don’t want to know about it!” What can I say, Al? I had no idea at the time; now, of course, I had an inkling of where you were coming from...] 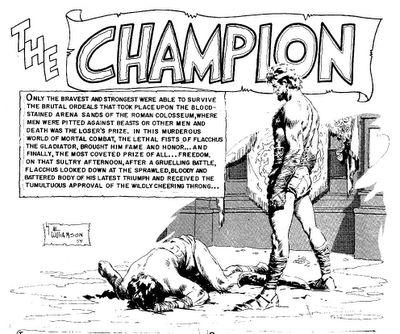 But most mesmerizing of all were Sam Glanzman’s pages, illustrating the eight-page “Giants in the Earth.” 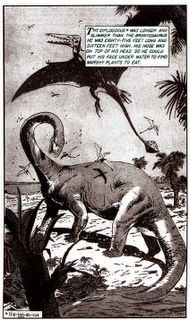 Though there was little sequential intensity to the piece -- composed, essentially, of unconnected single-page splashes depicting the ‘star’ dinosaurs circa 1959 pop science, many of which were (apparent even to my encyclopedia-trained four-year-old eyes) clearly drawn from Charles Knight’s paintings -- it was Glanzman’s drawing and inking style that I found riveting. Sam dared to be ‘messy’: his jungles and saurians were fly-blown and gritty, stray drops of water, slaver, and shreds of vegetation dropped away from his dinosaurs, unidentifiable bits of matter spun or hung in the air, as if suspended or moved by the heat and humidity. I’d been around enough barnyards, ponds, and forests to know nature was as ‘messy’ as Glanzman’s tableaus, which I quickly loved as I’d loved no drawings before. Glanzman eschewed the neat sterility of most natural history and paleontology art, and seemed more tactile, more alive, than any art I’d ever laid eyes on before. His mere eight pages of comic art blew away every recreation of dinosaur life I’d ever seen before, and I was hooked. From that day on, I had a tyrannosaur on my back. I was a dinosaur comic junkie in need of a fix -- of which there were precious few. 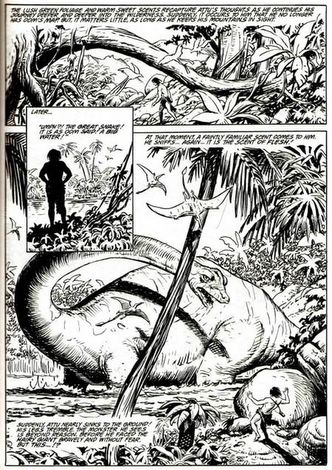 Almost three years later, Gilberton and CLASSICS ILLUSTRATED obliged with a giant “Special Issue,” PREHISTORIC WORLD (July, 1962). Though it was a fine comic indeed, featuring at least one innovative bit of sequential experimentation (the three-pager “The Wonderful Earth Movie,” presenting tiny panels illustrating an imaginary one-year-long movie about the history of life on Earth, offering a humbling, mind-boggling perspective on how fleeting man’s cameo in that history is) and lots of dinosaurs, it didn’t have anything approaching those pages by Sam Glanzman, and thus never assumed the mythic stature of that first CLASSICS ILLUSTRATED dinosaur comic. 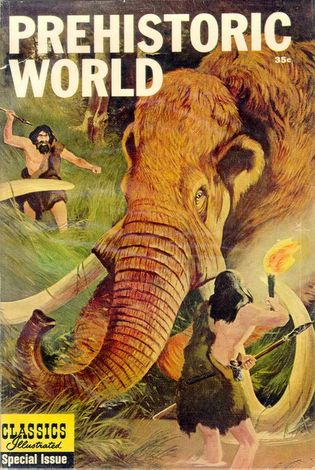 So desperate was my hunger, and unproductive my search, that even a Catholic comic book might offer sanctuary. Among the treasures of my youth I ache to hold again in my hands again is a one-off issue of the Catholic comicbook series TREASURE CHEST, which for one and only one glorious issue in the late 1950s or very early 1960s featured a cover story on dinosaurs. It was, if memory serves, as much an educational dinosaur comic as the Classics Illustrated specials, and very nicely illustrated at that. Alas, the copy I was given at St. Patrick’s in Waterbury, Vermont was promptly cut and clipped for pasting into my dinosaur scrapbook, and I’ve never seen a copy since, though I’ve searched for over three decades. I’d love to see that issue of TREASURE CHEST again and read it with adult eyes. I’m curious about how the Catholic editors and writers approached the subject, and how theological their orientation might have been. [Here it is Steve!] 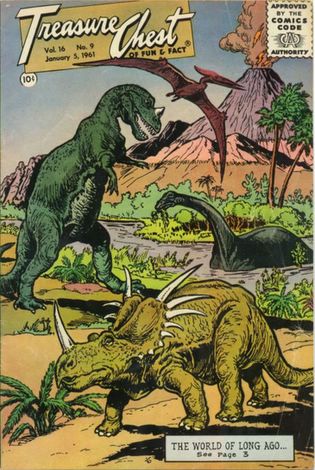 A more contemporary Christian (and stridently anti-Catholic) comicbook approach to the subject is still in print: Jack T. Chick’s notorious religious tracts tackled the controversy over evolution time and time again -- most memorably in Chick’s mini-comic anti-evolution screed BIG DADDY, and most gloriously in ‘The Crusaders’ color comicbook PRIMAL MAN?(‘The Crusaders’ Vol. 6, 1976). The fossil record of early man commands more attention and takes more heat than the dinosaurs do in these comics, but PRIMAL MAN? plays the faux-fossil card of the Texan Paluxy river bed dinosaur footprints which appear alongside (carved) human prints, a favorite Creationist strategy. But I’m getting a little ahead of my chronology. Back to the 1960s...

Read Part 5 of the series by clicking HERE.

Steve R. Bissette is an artist, writer and film historian who lives in Vermont. He is noted for, amongst many things, his long run as illustrator of SWAMP THING for DC Comics in the 1980's and for self-publishing the acclaimed horror anthology TABOO and a 'real' dinosaur comic TYRANT(R).
Posted by Michael J. Ryan, Ph.D. at 8:53 AM