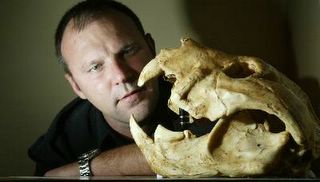 The saber-toothed tiger would seem to have been an exceptional chomper, but its roar was probably worse than its bite, according to a report published online 23 March in the Proceedings of The Royal Society B: Biological Sciences. By calculating the ratio of bite force to body mass for 39 living and extinct carnivorous mammals, researchers determined that the Tasmanian devil tops the chart with a relative bite 40% stronger than that of the African lion. In contrast, the extinct saber-toothed tiger had one of the weakest bites for its size, suggesting it may have killed by stabbing.
Posted by Michael J. Ryan, Ph.D. at 9:22 PM