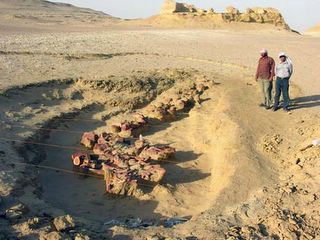 Dr. Philip D. Gingerich, a paleontologist from the University of Michigan and National Geographic grantee, has announced that his team has excavated the first known nearly complete skeleton of a Basilosaurus isis (above). The 18-meter-long, 40-million-year-old fossil will now be shipped to Michigan, where experts will preserve it. Later they will return the fossil to Egypt along with a complete cast of the skeleton.

The first of the truly gigantic whales, Basilosaurus had a serpentine shape and short, sharp teeth for hunting sharks and other prey. Unlike today's whales, it had no blowhole—the ancient behemoth had to raise its head above water to breathe. Basilosaurus also still had the feet it inherited from its land-dwelling ancestors.
Posted by Michael J. Ryan, Ph.D. at 9:00 AM