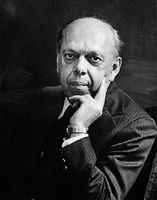 Philip Hauge Abelson was a U.S. physical chemist who proposed the gas diffusion process for separating uranium-235 from uranium-238 which was essential to the development of the atomic bomb. In collaboration with the U.S. physicist Edwin M. McMillan, he discovered a new element, later named neptunium, produced by irradiating uranium with neutrons. At the end WW II, his report on the feasibility of building a nuclear-powered submarine gave birth to the U.S. program in that field. In 1946, Abelson returned to the Carnegie Institution and pioneered in utilizing radioactive isotopes. As director of the Geophysics Laboratory of the Carnegie Institution (1953-71), he found amino acids in fossils, and fatty acids in rocks more than 1,000,000,000 years old.

English sociologist and philosopher who was an early adherent of evolutionary theory. He regarded society as an organism which was evolving from a simple primitive state to a complex heterogeneous form according to the designs of an unknown and unknowable absolute force. Similarly, knowledge developed from an undifferentiated mass into the various separate sciences. Formulating his ideas independently of Darwin, Spencer coined the phrase "survival of the fittest" as early as 1852. He applied Darwin's theory of natural selection (proposed four years later) to social development and in A System of Synthetic Philosophy (1862-96) presented a philosophical system to the natural and social sciences, synthesizing metaphysics, biology, psychology, sociology, and ethics.