This week in Nature: 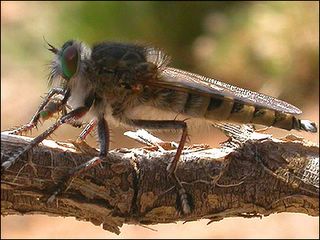 By carefully studying animals and plants in the Canary and Hawaiian Islands, Dr Emerson and his colleague Niclas Kolm were able to show an apparent link between biodiversity and the evolution of new species.

They found that endemic species, such as the predatory robber fly (Promachus vexator), are more common in places that are bustling with many different species. Therefore, they speculate, new species are more likely to evolve if they are surrounded by an already rich biodiversity.

The researchers can think of three reasons why this might be the case. First, species that are forced to share a space with a lot of other species usually have smaller population sizes. That means they are more susceptible to genetic drift, which can speed up speciation.

Secondly, islands with a rich biodiversity have more habitat complexity. In other words, instead of just one habitat - say, grass - there is, for example, grass, shrubs and trees. That means species are more likely to evolve new adaptations and, eventually, become different species.

Thirdly and, the researchers believe, most importantly, competition between species can encourage speciation.

"We think the islands with more species have an increased interaction effect - and that is the most significant thing," said Dr Emerson. "So the more species you have, the more competitors and predators you face as an individual.