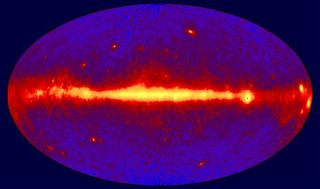 A gamma ray burst could have caused the Ordovician extinction 450 million years ago, killing 60% of marine invertebrates at a time when life was largely confined to the sea.

These cosmic blasts are the most powerful explosions in the Universe. The scientists think a 10-second burst near Earth could deplete up to half of the planet's ozone layer. With the ozone layer devastated, the Sun's ultraviolet radiation could have killed off much of the life on land and near the surface of oceans and lakes.

Gamma ray bursts are rare occurrences, but scientists estimate that at least one must have occurred near the Earth in the past one billion years. "A gamma ray burst originating within 6,000 light-years from Earth would have a devastating effect on life," said co-author Dr Adrian Melott, an astronomer at the University of Kansas, US.

"We don't know exactly when one came, but we're rather sure it did come - and left its mark. What's most surprising is that just a 10-second burst can cause years of devastating ozone damage.