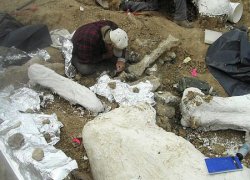 The remarkably well-preserved remnants of an estimated half-million-year-old mammoth - including both tusks - were discovered at a new housing development in Southern California. An onsite paleontologist found the remains, which include 50 percent to 70 percent of the Ice Age creature, as crews cleared away hillsides to prepare for building, Mayor Pro Tem Clint Harper said.

Paleontologist Mark Roeder estimated the mammoth was about 12 feet tall, Harper said. Roeder believed it was not a pygmy or imperial mammoth, but he had not yet determined its exact type, Harper said. Harper said the first bones were spotted several days ago and a special crew was called in after Roeder found more remnants, including the 6- and 7-foot-long tusks.

Moorpark in Ventura County is about 30 miles west-northwest of downtown Los Angeles. Other Ice Age creatures have been found in recent years around Southern California, including a mastodon in Simi Valley, a mammoth in Oceanside and a pygmy mammoth on the Channel Islands.
Posted by Michael J. Ryan, Ph.D. at 9:44 PM