From the latest issue of Geology: 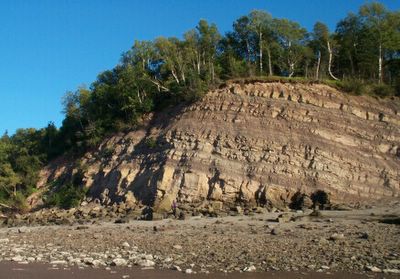 The cliffs at Joggins, on the coast of the Bay of Fundy in Nova Scotia, are famous for fossil trees that are preserved in sandstone and shale layers known as the Joggins Formation. The trees stand upright, and are 5–6 m (16–20 ft) tall. The section in the coastal cliffs is widely regarded as the world's best exposure of Carboniferous-age, coal-bearing strata--distinctions that will feature prominently in the Canadian government's pending application for UNESCO World Heritage Site status. This section profoundly influenced the founders of the science of geology in the 19th century, and is mentioned in Darwin's Origin of Species. The fossil trees, known as lycopsids, grew in tropical wetlands, a little over 300 million years ago. The mud and sand in which they grew accumulated extremely rapidly; the Joggins Formation is about 1.5 km (just under a mile) thick, but was laid down in only about 1.5 million years, suggesting that the area was subsiding rapidly. The new results presented in this paper are based on seismic profiles, recently collected in the course of petroleum exploration for in the Cumberland Basin just east of Joggins. These profiles show that layers of salt were once present deep below the surface, but that the salt was able to flow because of its softness and low density, rising to the surface in structures known as diapirs. The profiles show that the salt was moving while the Joggins Formation was being deposited. The withdrawal of salt led to the subsidence of the low-lying area in which the Joggins trees grew, leading to the preservation of both the coal seams and these famous fossil forests.

For more on the Joggins Fossil Cliffs click HERE.