megalodon vs. The Great White

A significant debate is currently underway in the scientific community over the evolution of the Great White shark, and Chuck Ciampaglio, Ph.D., an assistant professor of geology at the Wright State University Lake Campus, is right in the middle of it. The issue is if the Great White, one of the most feared predators of the sea, evolved from the huge prehistoric Carcharocles megalodon shark or if its ancestry rests with the mako shark. 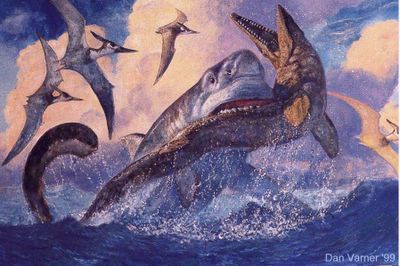 “Most scientists would probably say the Great Whites evolved from the megalodon line, which existed from two million to twenty million years ago. They were huge sharks, approximately the length of a Greyhound bus and possessing teeth that were up to six inches long,” explains Ciampaglio. “However, our research, which is based on analyzing fossils of several hundred shark teeth, shows that the Great White shares more similarities with the mako shark.” He added that because sharks regularly replace their teeth, it is relatively easy to obtain tooth samples through fossil field work along the Atlantic seaboard.