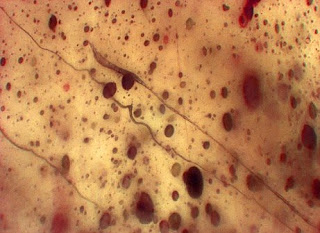 Spot the web.
From RedOrbit:

Paleobiologist Martin Brasier said the 140-million-year-old web is proof that arachnids have been around since the time of the dinosaur. He noted that the threads were linked to each other in the same nearly circular pattern seen in gardens throughout the world.

A microscope revealed miniscule threads about 1/20th of an inch long among bits of burnt sap and fossilized vegetable matter.

However, spider experts believe the webs were developed even earlier, despite the fact they rarely leave any trace.
Posted by Michael J. Ryan, Ph.D. at 9:38 AM