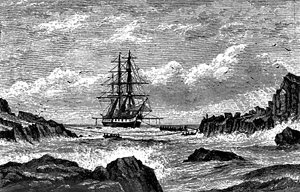 The Challenger at St. Paul's Rocks
From Today In Science History:

In 1872, the H.M.S. Challenger embarked from Portsmouth, England on the world's first scientific voyage around the world. Physicists, chemists, and biologists collaborated with expert navigators to map the sea. The Challenger was a corvette class ship, a military vessel that traveled under sail but had auxiliary steam power. The ship was fitted with a natural history laboratory where specimens were examined, identified, dissected and drawn; a chemistry laboratory; and scientific equipment.

During the 4 year journey, ending on 24 May 1876, the voyage zig-zagged around the globe to visit every continent, sounded the ocean bottom to a depth of 26,850-ft, found many new species, and provided collections for scores of biologists.

The expedition catalogued 4,000 previously unknown species. John Murray, who supervised the publication, described the report as "the greatest advance in the knowledge of our planet since the celebrated discoveries of the fifteenth and sixteenth centuries".

The Voyage of the H.M.S. Challenger

Report Of The Scientific Results of the Exploring Voyage of H.M.S. Challenger during the years 1873-76
Posted by Michael J. Ryan, Ph.D. at 9:50 AM