The Postcranial Skeleton of Catopsbaatar 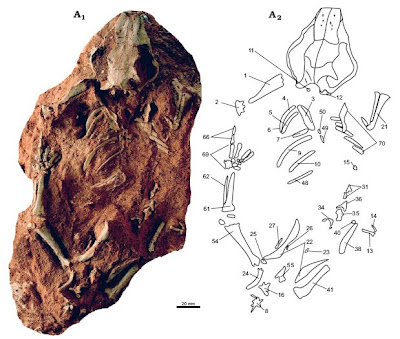 Abstract [edit]: We describe an incomplete postcranial skeleton of Catopsbaatar catopsaloides from the ?late Campanian red beds of Hermiin Tsav I, in the Gobi Desert, Mongolia. The studied skeleton contains some parts not preserved or incompletely known in other multituberculate genera, such as a long spinous process in a single lumbar vertebra, which together with long transverse processes preserved in Nemegtbaatar, might indicate that at least some multituberculates had jumping ability.

The calcaneus of Catopsbaatar is unusual, differing from most other multituberculates (where known) and other mammals by having a short tuber calcanei, with a large proximal anvil−shaped process strongly bent laterally and ventrally, arranged obliquely with respect to the distal margin of the calcaneus, rather than arranged at 90 to it, as in other mammals. This suggests the presence of strong muscles that attached to the tuber calcanei, perhaps further attesting to jumping abilities in Catopsbaatar. We also describean unfused pelvic girdle and the first extratarsal spur bone (os cornu calcaris) known in multituberculates.
Posted by Michael J. Ryan, Ph.D. at 9:20 AM