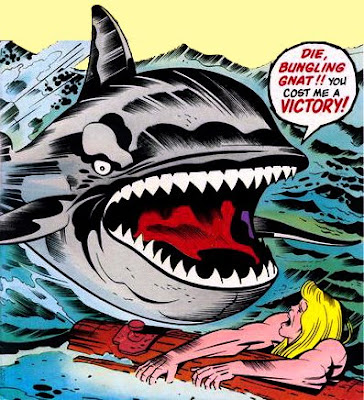 The tusks of the rarely seen beaked whales are known to be used in competition between males - another purpose seems to be to attract female beaked whales and to avoid mistakes in choosing a mate.

From the press release

The evolutionary origin of these distinctive “tusks” is one of the first examples of “sexual selection” implicated in the radiation of a group of mammals outside ungulates (deer, elk and antelope). 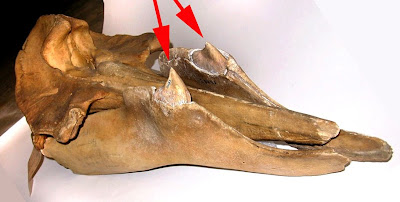 “It turns out that tusks are largely an ornamental trait that became a driver in species separation,” Baker added. “The tusks help females identify males within their species, which could otherwise be difficult as these species are quite similar to each other in shape and coloration.”

The two modified teeth or tusks of the male 'dense-beaked' whale appear to be fierce weapons (see photo of skull) but are only partly erupted during life, causing only minor scarring during male-male competition (see parallel scars in photo of living whale). Photos: Nan Hauser, The Center for Cetacean Research and Conservation.

Many animal species develop traits that allow the males to compete with each other physically, such as antlers used for sparring by adult bull elk. Some of these have other purposes, such as the tusks of walruses that can be used for foraging as well as fighting. And some species display ornamental traits to attract mates – the coloration of the peacock, or the songs of birds.

The beaked whale is unusual in that its tusks have no obvious functional purpose other than to distinguish it from similar looking species of beaked whales.

Baker says speciation occurs in many terrestrial species through geographic isolation, such as separation by canyons, major river systems, or islands. In the ocean, however, these geographical barriers are largely absent. Different species of beaked whales occupy the same trophic level and can look remarkably similar – to the point where scientists can only differentiate them through DNA testing.

“Interestingly,” he said, “the species of beaked whales that are in the same ocean regions – even ‘sister’ species – are the most different in the shape of the tusks. Those that are closely related genetically but live in different oceans are the most alike.”

It would have been nice if the lead author of the study, Merel Dalebout, the former Ph.D. student of Baker, had actually got at least one quote in the press release.