Panderichthys & The Origin of Digits 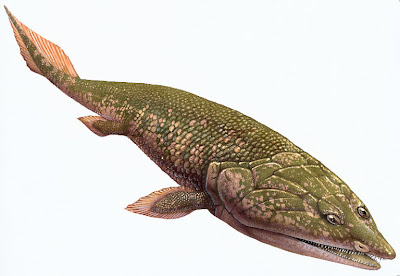 image
Abstract: One of the identifying characteristics of tetrapods (limbed vertebrates) is the presence of fingers and toes. Whereas the proximal part of the tetrapod limb skeleton can easily be homologized with the paired fin skeletons of sarcopterygian (lobe-finned) fish, there has been much debate about the origin of digits.

Early hypotheses interpreted digits as derivatives of fin radials, but during the 1990s the idea gained acceptance that digits are evolutionary novelties without direct equivalents in fish fin skeletons. This was partly based on developmental genetic data, but also substantially on the pectoral fin skeleton of the elpistostegid (transitional fish/tetrapod) Panderichthys, which appeared to lack distal digit-like radials.

Here we present a CT scan study of an undisturbed pectoral fin of Panderichthys demonstrating that the plate-like 'ulnare' of previous reconstructions is an artefact and that distal radials are in fact present. This distal portion is more tetrapod-like than that found in Tiktaalik and, in combination with new data about fin development in basal actinopterygians, sharks and lungfish, makes a strong case for fingers not being a novelty of tetrapods but derived from pre-existing distal radials present in all sarcopterygian fish. 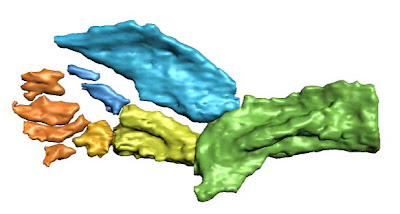 Click HERE to go to the Nature page hosting QT movies of the CT scans.
Posted by Michael J. Ryan, Ph.D. at 9:53 AM