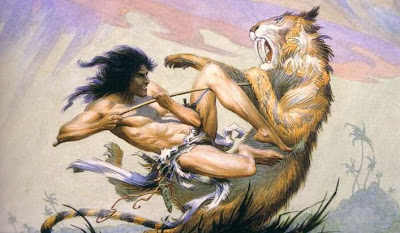 Neanderthal populations disappeared from Europe prior to the arrival of human populations around 40,000 years ago. Researchers have determined that their extinction was principally a result of competition with Cro-Magnon populations, rather than the consequences of climate change.

The researchers used geographic locations of archaeological sites dated by radiocarbon, in conjunction with high-resolution simulations of past climates for specific periods to analyze relationships between the potential areas occupied by each human population. This modeling approach also allows the projection of the ecological footprint of one culture onto the environmental conditions of a later climatic phase―by comparing this projected prediction to the known archaeological sites dated to this later period, it is possible to determine if the ecological niche exploited by this human population remained the same, or if it contracted or expanded during that period of time.

Comparing these reconstructed areas for Neanderthals and anatomically modern humans during each of the climatic phases concerned, and by projecting each niche onto the subsequent climatic phases, Banks and colleagues determined that Neanderthals had the possibility to maintain their range across Europe during a period of less severe climatic conditions called Greenland Interstadial 8 (GI8).

However, the archaeological record shows that this did not occur, and Neanderthal disappearance occurs at a point when we see the geographic expansion of the ecological niche occupied by modern humans during GI8.

The researchers conclude that the Neanderthal populations that occupied what is now southern Spain were the last to survive because they were able to avoid direct competition with modern humans since the two populations exploited distinct territories during the cold climatic conditions of H4. They also point out that during this population event contact between Neanderthals and modern humans may have permitted cultural and genetic exchanges.
Posted by Michael J. Ryan, Ph.D. at 4:15 PM