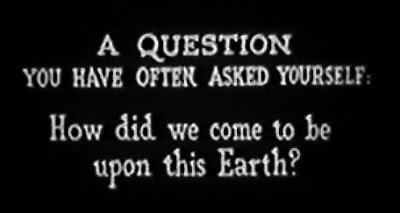 The Fleischer Brothers, Max and Dave, made some of the greatest animated cartoons an audience ever watched with their Inkwell Studios between 1921 to 1942. From their early success with Betty Boop, they also created the now legendary Superman and Popeye cartoons. Although their names are largely forgotten by the public today, the style and genius of their films still inspire each new generation of animators.

Part 2, Part 3, Part 4.
In addition to cartoons, the studio also made non-animated films such as “Evolution” (1923 [according to IMDB]). The film was Max Fleischer’s response to the high profile 1925 trial of John Scopes for teaching evolution in Tennessee.

“The trial was a fight between science and religion, and since science was involved Max [Fleischer] was once again completely captivated. He decided to make another long film that would present the scientific argument for Darwin’s theory. He contacted the American Museum of Natural History in New York and, with its cooperation and assistance, produced Darwin’s Theory of Evolution, a five-reel feature combining animation and live action. Once again, the man who had earned his reputation making people laugh had taken on a profoundly serious subject. The film was another surprise hit. Its first public screening was held in the Kaufman Theater of the American Museum of Natural History.”

From Out of the Inkwell: Max Fleischer and the Animation Revolution by Richard Fleischer and Leonard Maltin.
Posted by Michael J. Ryan, Ph.D. at 12:10 PM